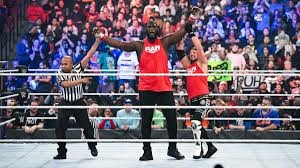 Another Nigerian professional wrestler, Tolulope ‘Jordan’ Omogbehin (aka Omos), has gained the attention of the global wrestling community after dominating opponents continuously in his single matches, following his debut  few months ago.

He joined another Nigerian-American, Sesugh Uhaa, who performs under the WWE ring name, Apollo Crews. The latter has won the United States and Intercontinental titles. Both athletes are currently performing in the RAW brand of WWE, the number one global wrestling platform.

Omos, 27, severed relationship with his tag team partner, AJ Styles, in late 2021, after an unpleasant in-the-ring comment by the latter capped a hitherto hidden disaffection.
The duo rejected tags in their two tag team matches that followed the unpleasant comment about Omos and their relationship degenerated further to the level that they faced each other in a match. Omos defeated AJ Styles, who many considered his senior partner. AJ, as he is fondly called by fans and colleagues, has reached the very top in WWE in his over 15 years wrestling career. He has won virtually all the titles in WWE as a top rated athlete.

Consequent upon the severed relationship, Omos found his new path as a single wrestler and has remained unbeaten since then. Aside his stellar performance in the 2022 Royal Rumble where it took about eight athletes to work together to eliminate him, his super defeat of Commander Azeez (Crews’ tag partner), a fortnight ago, dazzled the world.
In an unusual show of strength, Omos tosses Azeez, another giant, like a normal  human. If his smooth defeat of Commander Azeez shocked the world, his show of power and dexterity in smashing both Crews and Azeez in a two-on-one handicapped match last Monday evening mesmerized the wrestling global community.
After beating both convincingly to stamp his dominance, Omos pinned both on each other for the referee’s count of 1-3 to win the match. In a typical Nigerian ecstatic blast, Omos roared in his native Yoruba language, beating his chest with his right hand: “Emi omo Ogun (meaning I the son of Ogun.) Ogun in Yoruba land is regarded as the god of Iron who nobody dares because of renowned swift power to strike and kill.

Since then, the WWE Universe has been plunged into a natural conversation about who is able to give Omos a good fight and whether he does deserve a match in Wrestlemania which is slated for April 2 and 3 in Texas.

Wrestlemania is the grandest stage for wrestlers. Only top-rated athletes who are able to prove their expertise get matches in Wrestlemania.