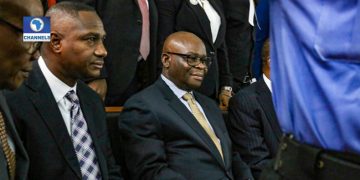 Onnoghenâ€™s trial: Drama as prosecution team members shout at each other, tribunal to deliver judgment on Thursday

Onnoghenâ€™s trial: Drama as prosecution team members shout at each other, tribunal to deliver judgment on Thursday 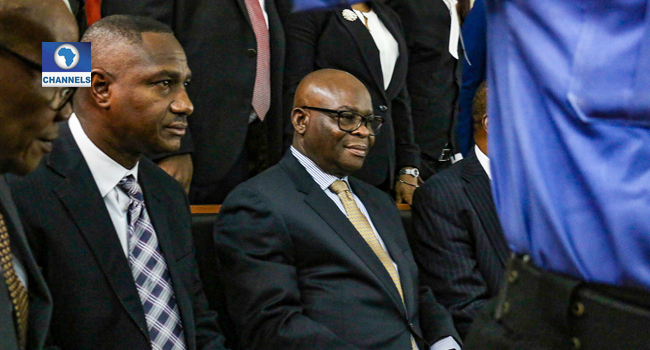 There was a drama on Monday at the resumed trial of the the suspended Chief Justice of Nigeria(CJN), Justice Walter Onnoghen, at the Code of Conduct Trial(CCT), as members of the prosecution team had a disagreement as proceedings got underway.

The drama began when the prosecution team led by Mr. Aliyu Umar(SAN), and the defence team led by Mr. Okon Effiong(SAN), announced appearances for their teams in readiness for the business of the day which was the adoption of final addresses.

As Umar was making his announcement, a member of his team, Prof. Zainab Duke, attempted to speak to the bench but was shouted down by Umar.

Umar insisted that Duke must take permission from him before she could speak, a stand which saw the situation degenerate further.

Duke sought the protection of the judge on the issue and in response, the Chairman of the three-man panel of justices, Justice Danladi Umar, called for peace, adding that the lead prosecuting counselâ€™s point was in order.

â€śOnly one counsel can speak for the teamâ€ť, Justice Umar said.

Duke attempted to speak again but she was cut short by Umar, who appealed that the tribunal give an order that she should be sent out of the courtroom.

Following the application of the lead prosecution counsel, the tribunal struck out the name of Duke as a member of the prosecution team and advised her to either leave if she wants to or go to the back of the court.

After the drama, the tribunal started hearing the final submission of the parties in the suit.

Counsel to Onnoghen, Effiong, in his submission said when the CJN stated that he forgot to fill his asset declaration form, it was not a confession and cannot be held against him.

â€śConfession in law is not straight forward as writing, that he forgot did not amount to an admission of guilt,â€ť he said.

He faulted the charge for not following the element of an offence as created by the law.

He also said that the prosecution failed woefully to prove the elements of the offence as contained in the 5th schedule of the constitution.

According to him, â€śthey established that there is a declaration but could not establish which of the statement were false because it was not verified by a verification authority as stipulated by law.â€ť

He concluded by saying the prosecutionâ€™s case is defective and urged the tribunal to dismiss it completely.

The prosecution counsel, Umar, in his final submission argued that the prosecution has proven its case against the defendant beyond all reasonable doubt, insisting that the suspended CJN is guilty of all six charges against him.

He stated that in coming to a decision whether a person is guilty or not, it is the hard facts before the tribunal that will aid the determination.

He said it is a misconception by the defence team to think that a charge is null and void because it was not elegantly drafted.

â€śThe defence has not shown that the charges mislead the defendant in any way,â€ť Umar said.

He further noted that the statement by Onnoghen that he forgot is an admission of guilt to the offence.

Responding on a point of law, counsel to Onnoghen, Effiong, said by section 36 of the constitution, a person can only be found guilty and punished based on law.

He said, â€śthe law says substantial declaration and not total,â€ť adding that the law makes room for where there is an omission, a person can regularise his form.

The Tribunal Chairman, Justice Umar, reserved judgment on the matter till Thursday, April 18.