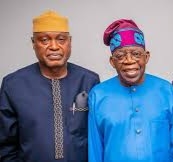 Ekiti State Governor, Mr Biodun Oyebanji, has said that the state was indebted to former Lagos State Governor and presidential candidate of the All Progressives Congress (APC), Asiwaju Bola Tinubu, and would pay back with massive votes during next month’s election.

Oyebanji, who stated this during the inauguration of the 143-member APC State Presidential Campaign Council in Ado Ekiti on Wednesday, described the APC flagbearer as the undisputable father of progressive politics in the country who should be well supported for the nation’s number one job.

The governor, who was joined at the inauguration ceremony by the immediate past governor of the state, Dr Kayode Fayemi, said Tinubu was a benefactor to the progressive family in Ekiti State, adding that his support for the progressives in the early years of the struggle was unquantifiable.

He described the APC presidential candidate as the most qualified among all the candidates jostling for the presidential seat in terms of competence, capacity, courage, experience and sagacity.

“This time, we are searching for the President of the Federal Republic of Nigeria and Our Party, the All Progress Congress (APC) has presented the best man for the job. We are no stranger to the candidate of our party. Asiwaju Ahmed Bola Tinubu is the indisputable father of progressive politics in Nigeria.

“He ticks all the boxes for competence, courage, character, excellence, experience and sagacity. In terms of political acumen, he is a living legend; and when it comes to ability and capacity to govern, he is miles ahead of his strongest rivals.

“Here in Ekiti, he was our benefactor in the progressive family. He was politically there for us at our toddling years, it is time for us to feed the leader that once nursed us. The duty is now ours to go from house to house, shelter to shelter, and place to place to ensure that our party and candidate win convincingly. For us in Ekiti, our target is to be the state that returns the highest percentage of votes to APC and Asiwaju Bola Tinubu come February 25, 2023,” the governor said.

He called on all APC leaders to commence house to house campaign to ensure that the party wins convincingly, adding that the target for the state was to return the highest percentage of votes to APC and its presidential candidate in the February 25, 2023 elections.

Oyebanji noted that all politics is local. He, therefore, urged members of the council to take the political campaign to the grassroots and ensure victory for the party at all levels of elections, from presidential to state assembly elections.

He further stated that the forthcoming presidential election was so important to the state and the party cannot rest on its oars of past achievements, adding that members must not be complacent because every election was important and should be treated as such.

The governor warned party members to maintain peace and decorum before, during and after the election by shunning violence and any action that could breach the peace of the state or do anything that could cause the election to be challenged or voided in court.

Earlier in his remarks, the former governor of Ekiti State and co-chairman of the council, Dr Kayode Fayemi, stressed the importance of peaceful coexistence and unity of purpose to achieve success in the election, noting that Ekiti electorates were enlightened and could not be taking for granted.

Fayemi urged all candidates and members of the council not to stage their campaign in Abuja but get back to their wards and constituencies to drive the campaign.

The APC Chairman in Ekiti sState, Barr. Paul Omotoso, noted that everyone should try his best to ensure victory for Tinubu and other candidates of the party, stressing that APC was a party with discipline, decorum and will not do anything that will bring about bad image for the party.

Omotoso, who was represented by the Vice Chairman, Hon. Sola Elesin, urged all party members to show commitment to the campaign by mobilizing the grassroots for effective and successful national and states elections.