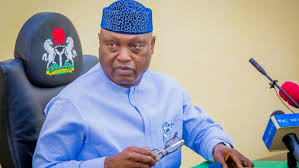 Oyebanji, who described the ruling of the tribunal as a “landmark judgement,” thanked the judiciary for living up to its reputation as the bastion of democracy.

Addressing a crowd of jubilant supporters at the foyer of the Governor’s Office, Ado-Ekiti, shortly after the tribunal judgement on Thursday, Oyebanji said the ruling was a further proof that God had a hand in his election as governor of Ekiti State.

In a statement by his Chief Press Secretary, Yinka Oyebode, the governor urged his supporters to celebrate in moderation and avoid any form of name calling or hostility against members of the opposition party.

He also hailed the Social Democratic Party (SDP) candidate, Engr Segun Oni, for challenging the electoral process at the tribunal, adding that it was within his right to do so.

Oyebanji, however, said that with the tribunal ruling affirming him as governor of the state, it was time Oni accepts defeat honourably, re-join the All Progressives Congress (APC) and work with his administration to develop the state.

The governor, who was joined by his deputy, Chief (Mrs) Monisade Afuye, Secretary to the State Government, Dr Habibat Adubiaro, and other top government functionaries sang songs of praises to God intermittently as he addressed the people.

“I commend the judiciary for this landmark judgement. It speaks to one thing- when God is in a matter, everything will end well.

“The judgement is to God’s glory and to the benefit of Ekiti people. I just want to plead with all of us. We are one in Ekiti State. The party that has gone to court did so in exercise of its fundamental right.

“We need them to join us in our effort to make Ekiti more prosperous,” he added.

Also addressing newsmen after a meeting with a delegation of Ekiti Obas, Oyebanji said he was never distracted by the SDP petition at the tribunal because he knew it lacked substance. He, however, promised to continue to implement his six-pillar development agenda aimed at bringing prosperity to the people of the state.

“It is a victory for democracy and I dedicate this to the Almighty God and the people of Ekiti State. It’s a validation of what they did during the election and I thank the judiciary for upholding our victory as a party.

“I actually don’t have opponents in fairness when it comes to issue of Ekiti State. Ekiti is a small state, we are homogeneous, we are one and the right I have to the governorship of Ekiti State is the right every indigene of the state has to that office.

“I see it as a contest and I hereby call on Engr. Segun Oni to join hands with me to develop the state. He is my leader, I have absolute respect for him and that respect has not diminished so I will be linking up with him so that we can work together. He was part and parcel of this party before and I want to call him back to his former party and the more the merrier,” Oyebanji said.

Asked whether he was distracted by the tribunal sittings, he said he was never distracted.

“I’ve been facing my job, Ekiti people has put us on this job and we have a duty to ensure that we implement our manifesto and the contract we signed with them. Court case should not be an excuse for non-performance, the past 75 days have been exciting and I’m happy with how we started, we have put together building blocks that will lead to rapid development of the state, and we are on course,” the governor added.

Speaking further, Oyebanji said the state chapter of APC will soon unfold its campaign for the 2023 presidential election, adding that the APC presidential candidate, Asiwaju Bola Ahmed Tinubu ,remains the best of all the candidates in terms of competence, character and level of preparation for the job.

He urged all Ekiti citizens to key into the campaign for the Tinubu presidency, assuring that the state would witness tremendous progress under his presidency.