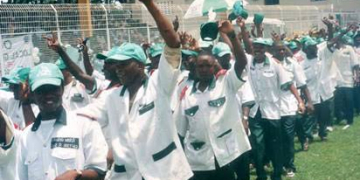 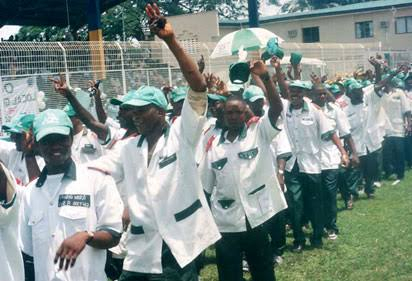 The Handshake Campaign Organisation (HANCO), official handlers of the Senator Olufemi Lanlehin governorship bid on the platform of the African Democratic Congress (ADC) in Oyo State has called on the Chairman of the National Union of Road Transport Workers (NURTW), Alh Abideen Ejiogbe, to be mindful of his utterances while supporting the All Progressives Congress (APC) in the state.

In a statement issued on Wednesday by Lanre Ogundipe, its Director of Media, Publicity and Protocol, HANCO said Ejiogbe has the right to support the APC but must not force his preference on union members.

According to the statement, “most times, he is even seen on the podium promising fire and brimstone, and castigating opposition candidates. Why we do not object to his support of whatever candidate that catches his fancy, we want him to realize that he leads a union comprising several individuals, who like him, also have democratic rights to support candidates of their choices, hence, he shouldn’t use his position to coerce members into doing his bidding.”

HANCO also wondered how INEC, “knowing the very important role NURTW will play in the coming polls, especially in the movement of sensitive election materials” will ensure equity, probity and fairness, especially with “a blatantly political State Chairman at the helms of affairs”

HANCO accused Oyo APC of planning “electoral heist” by planting about 70 members of the party as electoral officers in the 33 local government areas of the state.

It explained that “this devious scheme was made possible, owing to the fact that INEC’s local government offices are often times, located in the premises of most local government headquarters.”

The campaign organisation then called on INEC “to investigate this anomaly, and weed out all APC loyalists already planted to do the bidding of their highly unpopular party,”, adding that “not only must elections be free, fair and credible, it must be patently seen to be so.”

The statement concluded by saying that HANCO will “like to remind the APC, that all its antics, underhand dealings and shenanigans, will end up in futility; as the good people of Oyo State, already fed up with its near 8-year misrule, have elected to vote it out, and vote in Senator Olufemi Lanlehin (SOLAN), the people’s recognized true friend. This desperate antics, are therefore, a mere waste of time and resources!”