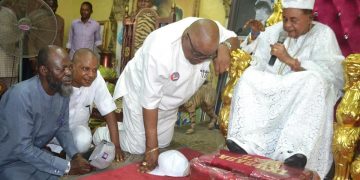 Oyo 2019: Your sins are forgiven, Alaafin tells Alao-Akala ahead of governorship election

Oyo 2019: Your sins are forgiven, Alaafin tells Alao-Akala ahead of governorship election 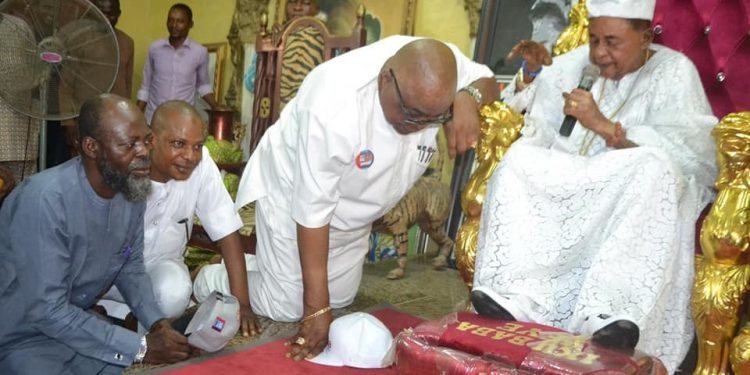 By Patrick Akpu and Akinwande Soji-Ojo

About nine years after the palace of the Alaafin of Oyo, Oba Lamidi Olayiwola Adeyemi declared then Governor Adebayo Alao-Akala, as an enemy, the Alaafin has granted Alao-Akala forgiveness for his sins.

Oba Adeyemi released his mercy on Alao-Akala on Saturday when he paid the monarch a courtesy visit to inform him of his governorship ambition and to ask for his royal blessings.

It would be recalled that towards the end of Alao-Akala’s tenure as governor in 2010 and 2011, there was no love lost between him and the Alaafin, who even alleged that the then governor had plotted to assassinate him using the Special Anti-Robbery Squad, an allegation Alao-Akala denied.

The Alaafin in that year’s election worked against the PDP, Alao-Akala’s party and supported the then ACN candidate, Senator Abiola Ajimobi, who eventually became governor.

But on Saturday, the Alaafin said Alao-Akala over the years had acted like a well trained child and he can attest that he is a good child. He said he had been forgiven a long time ago and he had been expecting him as a child to come back home.

According to him, he had worked with 13 presidents and head of states as well as 20 governors and none of them had ever admitted that they made a mistake while still in power both publicly and in private.

The Alaafin stated that Alao-Akala had written him a letter of apology even as a sitting governor and had also apologised publicly on the radio, adding that from the contents of the letter, it was obvious that Alao-Akala was reacting like a child abandoned by his father at that period.

“When a child talks to his father the way he spoke in that letter, it is obvious that he is a well trained child. He is a good child and he acted like one and I have forgiven him because he is my child,” Alaafin said.

Speaking on behalf of the Oyomesi, the Samu of Oyo, Chief Lamidi Oyewale stated that all had been forgiven, stating that the Oyomesi, the Queens and the princes had met and they have all listened to counsel and have wholeheartedly forgiven Alao-Akala who he described as a child of the palace.

Alao-Akala had earlier informed the Oyomesi that he has come home as a child who had realised his mistakes and found his way home.

“I have come home as your child and like a well trained child, I cannot make the same mistakes twice. I have come for prayers, I know all politicians are your children and you will pray for all of us, it is God that will decide which he will grant because God sees the heart of man in answering prayers.

“I am still the son you know, I have not changed. Help us to put Oyo state in its rightful position as the pacesetter. I know the significance of the Alaafin and the Oyomesi and I won’t take tradition for granted. We will not be proud or disappoint you,” Alao-Akala said.

Newspeakonline recalls that the late Aare Musulumi of Yorubaland, Alahani Azeez Arisekola, while speaking then on the many ‘sins’ of Alao-Akala as governor, said: “the governor went to Isale Oyo and greeted the Mogaji or the Baale there. He didn’t go to Alaafin’s palace to pay homage. He didn’t greet Alaafin”.

During the feud, Alao-Akala was quoted to have said that there was another traditional ruler in Oyo. Reacting, Arisekola said: “Any meaningful Yoruba person will fight against that because from time immemorial, over 150 years ago, we never heard that there are two kings in Oyo. We only heard of Alaafin’s empire up to Dahomey. So, where did he get another traditional ruler in Oyo?

“If not for the politics of our forefathers, any Oba that want to see Alaafin, in those days, would have to rub sand on his body, if at all he would be allowed to see Alaafin. So, why should we want to kill our own tradition? Why should you, because you are in power today, a temporary position, say that? There have been so many governors that have gone. You will do your own and go. How can you kill the tradition?”.

It would also be recalled that just before leaving office, having lost his reelection bid, Alao-Akala thre his last punch at the Alaafin by signing a bill passed by the Oyo State House of Assembly which amended the laws governing the council.

The law withdrew the permanent chairmanship title the Alaafin held and made it rotational among the Alaafin, the Olubadan of Ibadan and Soun of Ogbomoso every two years. The move was a huge blow to Oba Adeyemi.