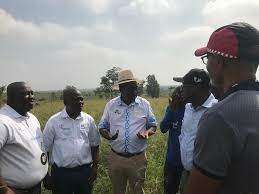 The Director General, Oyo State Agribusiness Development Agency (OYSADA), Dr. Debo Akande, who spoke during a visit by a team from the dairy company, noted that the Fasola Agribusiness Industrial Hub is a pilot project which would be replicated across the state and one which is already generating revenue into the government’s coffers.

While welcoming the Managing Director of FrieslandCampina WAMCO Plc, Mr Ben Langnat to the Fasola Agribusiness Industrial Hub, Akande reiterated that the partnership between the Oyo State Government and the dairy company promises to be a profitable one, which would make the state the hub of dairy production in Nigeria.

Speaking, Langnat said that FrieslandCampina WAMCO, makers of Peak Milk, have been in the business of producing dairy products for about 150 years.

He affirmed that the company has moved into Fasola Agribusiness Hub to commence livestock breeding and dairy production.

The MD explained that FrieslandCampina chose to partner with the Oyo State Government because of the proximity of the farm to its milk production factory in Lagos.

He also noted that the hub presents FrieslandCampina with the perfect opportunity to scale up, providing a platform to embark on livestock breeding on a large scale.

While lauding the administration of Governor Seyi Makinde for turning a previously moribund farm estate into a soon-to-be highly profitable venture for all parties involved, the Managing Director enjoined the Oyo State Government to complete the Oyo-Iseyin Road and improve on the security of the area.

He extolled Makinde for creating an enabling environment in Oyo State and promoting the ease of doing business.

He also stated that the land at Fasola was very good for planting of pasture for the cattle, and pointed to the presence of the dam and the hospitable people of the state as other reasons FrieslandCampina WAMCO chose Oyo State to expand its business.

The team leader also said that FrieslandCampina WAMCO had acquired 300 hectares at Fasola and had already built sheds to store feeds, boreholes for access to water, solar panels for the generation of power and is in the process of building a silage bank which will convert maize to silage for the cows.

“All these things, among others, have to be in place before the cows are brought into the hub in 2023.

“FrieslandCampina began working with farmers in Oyo State in 2011 and have grown our farmer-partnership to a whopping 12,000.

“This partnership with Oyo State is the next big step in line with their plans to scale up, and with the growing need to source for raw materials needed for production locally,” Langnat added.