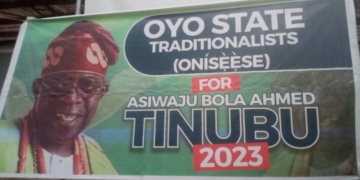 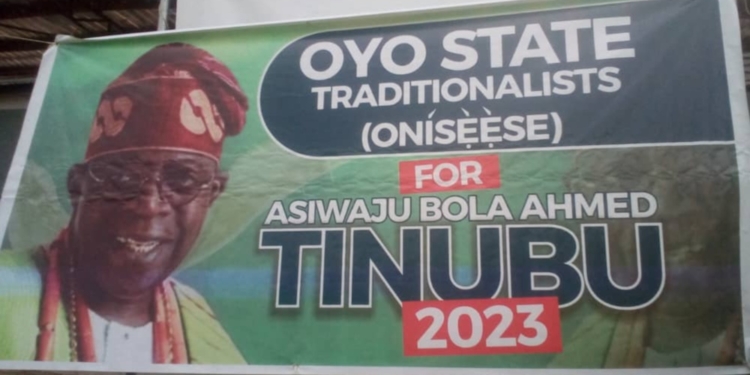 The traditionalists, who converged at Ilaji Hotel and Sports Resort, Akanran, Ibadan, on Saturday, said their endorsement is necessary for the victory of the APC candidate, who they described as the leading candidate in the election.

Recall that over 1000 selected representatives of Christian groups across the state had converged at the same venue last Saturday to pray and endorse Tinubu’s candidacy.

On December 3, Muslim faithful and their leaders also converged at Ilaji Hotel and Sports Resort to do the same, courtesy of Engr. Dotun Sanusi.

Speaking, the Aare Oniseese of Oyo State, Olukunmi Egbelade, said the event was not politically motivated, adding that what they are after is the peace, unity, progress and development of Yorubaland.

He noted that Yorubas will benefit a lot if their kinsman becomes the president, stressing that it is the turn of Yorubas to be at the helms of affairs of the nation.

He, however, urged Tinubu to declare a nationwide holiday for the traditional worshippers across after his emergence.

In his remarks, Chief Kazeem Omotosho, said there should not be any setback for Yorubas in the forthcoming elections, adding that Yorubas hold strategic position in the country’s politics.

“Some people believe we are not educated, they say we don’t know God, but we believe in God than them, none of the pastors or the Muslim clerics that didn’t pass through us,” he said.

Speaking on behalf of of Sanusi, Mogaji Nurudeen Akinade, said the motive behind the event was to show love and support the APC candidate’s ambition.

He said Sanusi is neither a politician nor veying for any political post, adding that he is just a businessman and phillantropist, who always use his resources to cater for the needs of the society.

“He is not a member of PDP nor APC, he is passionate about whatever that will lead to the progress and development of Yoruba land.

“The need for us to choose wisely brought us here today. I have researched the credentials of the major candidates and without being immodest, I like to tell you Asiwaju stands tall,” Akinade said.

Other traditional dignitraries at the event are Araba Awo of Ibadanland, Chief Odegbami Ifalere; head of Eleegun in Ibadan land, Chief Oyeniyi Okugbaja; Iya Sango of the world, Chief (Mrs) Odeleye; and representative of Oluawo of Oyo, Adejare Ifadare among others.