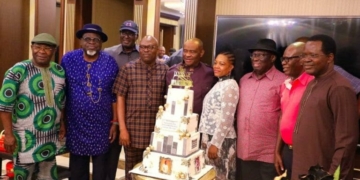 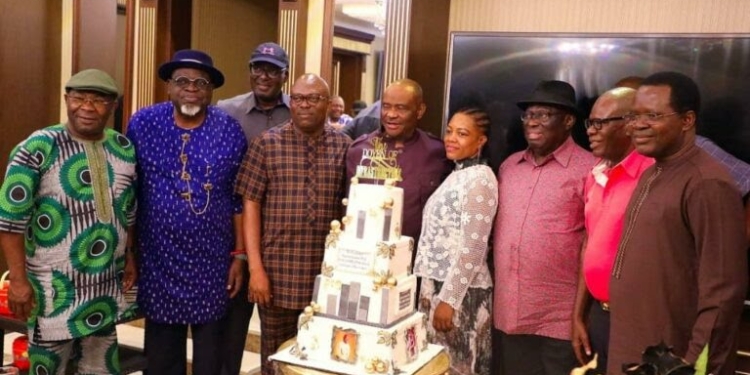 Wike said his demand that the North should relinquish the position of the national chairman of the PDP to the South remains a panacea to the crisis rocking the party ahead of the 2023 election.

The Rivers State Governor is leading a group of five PDP governors who had refused to support the ambition of the presidential candidate of the main opposition party over the continued stay of Ayu in office.

But Wike said he has no axe to grind with Atiku, according to a statement signed by his Special Assistant on Media, Kevin Ebiri, on Tuesday.

The Rivers governor made this assertion when his political associates and Chairman, Rivers Elders Council, Chief Ferdinand Alabraba, visited his private residence in Rumueprikom to felicitate with him on his birthday.

The governor recalled that precisely a year ago, Rivers Elders urged him to contest for the office of the President of Nigeria. According to him,  he heeded the advise and almost clinched the PDP presidential ticket if not for the  manipulation  of the process.

“I don’t regret I ran for presidency.  In the name of God, I am happy to make Rivers State proud. I am happy as far as I am concerned.  If they had allow it to be what it is supposed to be, I would have won the election. But it’s oka, it has happened.

“People said because I lost election, it doesn’t matter. I didn’t lose election. This is my first time of trying to run for the president of Nigeria and we made impact. If it is easy let them go ahead. Are they not the ones begging,” he said.

The governor reiterated that he does not  have any personal problem with Atiku, explaining that the seeming lingering crisis in the PDP has to do with demand from the southern stakeholders that the national chairman who hails from the North as the presidential candidate is from the North, should relinquish his position.

Wike explained that the reason why some of his Ikwerre brothers like Sir Celestine Omehia and former Deputy Speaker, House of Representatives, Austin Opara, are begrudging him is because of his insistence that it will be morally offensive for an Ikwerre man to succeed him or even  emerge as PDP candidate for Rivers East senatorial district.

“You people said I should go (to Senate), I said I won’t.  Allwell ( Onyesoh) could not have stopped me. Yes, today we are majority, you don’t know what tomorrow will be. I never did anything to undermine anybody. We must understand that,” the governor said.

Wike further described as sheer hypocrisy the allegation that he foisted the Rivers State PDP governorship candidate, Sir Siminalaye Fubara on the party.  He said the emergence of Fubara was a collective decision reached after those who had indicated interest to succeed him failed to reach a consensus to produce one candidate.

“When O.C.J. Okocha comes back we will publish the agreement signed by all,” he said.

He urged the PDP leaders to remain steadfast and focused as the sterling performance and transformational leadership provided by his administration since 2015 will enable the party to win the 2023 election with ease.

The Chairman, Rivers Elders Council, Alabraba, commended governor Wike for contesting the PDP presidential primaries and mounting an intense campaign that has left many astounded till date.

“Your Excellency, since after the primaries and all the matters arising, a lot of people have been wondering where are we going, what are we doing?  But, I will like to assure you that the belief we have in you and your type of leadership, whenever you decide to say where we are going, that is where all of us will go. We are not in a hurry. We will deliver Fubara, as our governor. We will deliver all the members of House of Representatives, all the senators, all the assembly men.

“But the other one we are waiting for whenever you decide. We will wait for you. Whatever you decide, that is where all of us will go. Your Excellency, we thank God that you have the ability and capacity to carry along a number of colleagues today known as G-5. Those are the most popular governors in this country today.  And we are not pressurising you. Whatever the group comes up with, whichever decision you take, be rest assured that your fellowship will key into it and support you to the last,” Alabraba added.