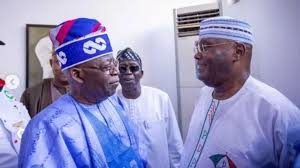 The All Progressives Congress Presidential Campaign Council( APC PCC) has demanded the disqualification and prosecution of the presidential candidate of the Peoples Democratic Party (PDP), Alhaji Atiku Abubakar.

Members of the Joint Media Directorates of the APC PCC made the at a world press conference in Abuja, on Monday.

Led by Dele Alake, the Special Adviser, Media Communications and Public Affairs of the PCC, they noted that their demands followed the revelations attributed to a whistleblower, Michael Achimugu.

The whistleblower who swore to an affidavit that he worked with the PDP presidential candidate as media consultant while the latter was vice president under Chief Olusegun Obasanjo, alleged in a trending video the financial scandal, termed Special “Purpose Vehicles (SPVs),” involving Atiku Abubakar when he was vice president.

The APC PCC told newsmen that companies were registered by the former vice president, using “trusted allies” as shareholders and directors.

Festus Keyamo, Director, Public Affairs and Chief Spokesperson of the camping council, who read the prepared press statement on behalf of his other colleagues accused Atiku of what he called “possible Infractions of the law.”

Citing provisions of the Code of Conduct for Public Officers, The Money Laundering (Prevention And Prohibition Act, 2022), the APC PCC tasked the Economic and Financial Crimes Commission and other anti-corruption agencies to initiate prosecution of the PDP presidential candidate.

“We understand that the law enforcement agencies may be reluctant to act simply because of the perception of persecution of a lresidential candidate that this may evoke.

“However, facts are sacred. The facts so far presented to the world clearly indicate that Atiku Abubakar has a case to answer. In other climes when such serious allegations arose in the middle of campaigns, the law-enforcement agencies acted decisively. You may recall that, in 2016, in the middle of campaigns for the exalted office of the Presidency of the United States, the FBI opened investigation into allegation of misuse of private emails against Hillary Clinton when she was Secretary of State. In fact, the case was referred to the Justice Department for likely prosecution few weeks to actual voting. Though, she was later cleared, it bears restating that a sane and dispassionate system never allowed such side talks to dissuade or distract them from initiating a process of investigation. It is the minimum expected in a constitutional democracy. That is what we call on the authorities to do in the case of Alhaji Atiku Abubakar,” he said.

They equally asked that the PDP presidential candidate be disqualified from contesting next month presidential election.

“In the light of these very grave revelations, we call on Atiku Abubakar to IMMEDIATELY tender an unreserved apology to the Nigerian people and step down from the Presidential race forthwith, whilst handing himself over to the law enforcement agencies,” Keyamo added.

Meanwhile, the Peoples Democratic Party (PDP) has said that the effect of the conviction and forfeiture of the sum of $460,000 by the presidential candidate of the All Progressives Congress (APC), Bola Tinubu, confirms that he is ineligible to run for the office of the Nigerian president.

Responding to the call made by the APC PCC on Monday, the PDP in a statement issued by its National Publicity Secretary, Debo Ologunagba accused the ruling party of engaging in an “irresponsible attempt” to divert public attention from the issues affecting Nigerians, APC’s “atrocious record” and its “vexatious misrule” by demanding that the PDP presidential candidate, Atiku Abubakar, should withdraw from the presidential race on account of “simulated allegations by the APC.”

“It is indeed ironic that an embattled Tinubu, who is beleaguered by uncountable cases of fraudulent activities, including perjury, forgery, treasury looting, corruption and narcotic-related conviction can attempt to impugn on the unimpeachable integrity of the PDP Presidential Candidate.

“In contrast, however, the APC Presidential Candidate has a litany of confirmed legal impediments on very grave issues including those that border on international crime, namely; trafficking in narcotics and taking proceeds of narcotics.

“In the recent case revealed in the United States of America, it is on record that the APC Presidential Candidate forfeited the sum of $460,000 which was confirmed and found to proceed of trafficking in narcotic; an international crime for which Nigeria, being a signatory to International Convention on trafficking in narcotic is obliged to enforce.

“The effect of the conviction and forfeiture of the sum of $460,000 by Asiwaju Tinubu confirms that he is ineligible and not qualified to contest for the Office of the President of Nigeria as required by the Constitution of the Federal Republic of Nigeria, 1999 (as amended).

“For clarity, Section 137 (1) (d) of the Constitution of Federal Republic of Nigeria, 1999 (as amended) provides that:(1) “A person shall not be qualified for election to the office of President if… (d) He is under a sentence of death imposed by any competent court of law or tribunal in Nigeria or a sentence of imprisonment or fine for any offence involving dishonesty or fraud (by whatever name called) or for any other offence, imposed on him by ANY court or tribunal or substituted by a competent authority for any other sentence imposed on him by such a court or tribunal.

“Having been convicted, sentenced and fined for narcotic trafficking in a criminal suit filed under the United States Criminal Code, Asiwaju Tinubu cannot by Section 137 (1)(d) of the Constitution of the Federal Republic of Nigeria 1999 (as amended) seek office as President of Nigeria.

“The APC Presidential Candidate has not come out to deny the conviction and forfeiture or show evidence of any attempt by him to challenge or appeal the judgment, apparently believing that it will slide with time. Asiwaju Tinubu ought to know that time does not run against the State in a criminal matter!

“He should therefore withdraw from the Presidential race having been found ineligible and not qualified to run or to contest for the Office of the President of Nigeria under the provisions of the Nigerian Constitution,” Ologunagba said.