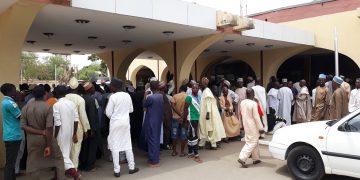 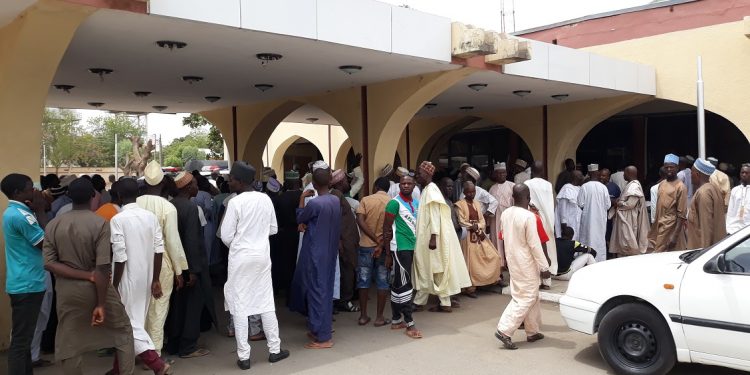 The ongoing process of the Kano State House of Assembly to pass a bill for the creation of four additional Emirate Councils in the state got the backing of residents of four local government areas that stormed the Assembly complex on Wednesday morning.

The people were from Gaya, Rano, Bichi and Karaye local government areas where the new emirates are to be created.

The supporters for the creation of the new emirates from the four local governments were led to the house by their respective local government chairmen. The House had to request for additional security personnel around the assembly complex.

Newspeakonline recalls that the Kano House of Assembly on Monday initiated the move to create the new Emirate Councils that would elevate the current status of some District Heads to First Class Emirs.

Sources have described the move as one of the steps Governor Abdullhi Ganduje was taken to whittle down the powers and influence of the current Emir of Kano, Muhammadu Sanusi II, who openly condemned the electoral violence and malpractices that rocked the last governorship election which gave the governor a second term in office.

Reports say the governor felt Sanusi’s call amounted to opposition to his second term bid and a support for former governor Rabiu Kwankwaso and his PDP candidate.

It is that the new emirate councils will serve as a bulwark against the Emir.

It is also being reported that Ganduje was plotting to dethrone Emir Sanusi theough a number of steps being taken, of which the new emirate councils is one.

The governor is said to have ordered the Kano State Public Complaints and Anti-Corruption Commission to open a fresh probe on the alleged financial mismanagement in Kano Emirate Council under the watch of the Emir.

In an exclusive report earlier in the week, SaharaReporters quoted a source as saying that the governor plans to “pick up the account details and then give it to the media to embarrass Sanusi and use that as a basis to dethrone him”.