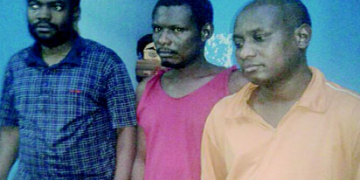 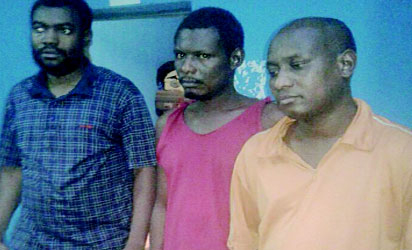 A 28-year-old man, Ikechukwu Daniel, suspected to be a member of a notorious kidnapping gang terrorizing the South Western part of the country, has been arrested by operatives of the Inspector- General of Police Special Intelligence Response Team, IRT, for allegedly masterminding the April 27, 2016, abduction of Senator Iyabo Anisulowo in Ogun State.

Senator Anisulowo, who represented Ogun West Senatorial District, between 2003 and 2007, was abducted alongside her security guard on her way home from her farm  along Igbogilad Road, in Yewa Local Government area of Ogun State. She was released after 10 days in captivity following pressure by the police on relatives and friends of members of the kidnap gang who were mainly Fulani natives.

Vanguard now reports that gathered during the week that IRT operatives who were acting on a directive by the Acting IGP, Ibrahim Idris, arrested one Mohammed Babuga, who provided information that aided the operatives in trailing Daniel, popularly known as ‘Ike’,  to his hideout in Festac Area of Lagos State. He was subsequently apprehended while negotiating a N4m ransom from relatives of another victim in his gang’s custody.

Sources at the IRT led by CSP Abba Kyari, disclosed that Daniel is an I-tech expert coaching Fulani kidnappers on the use the ICT in evading arrest

Daniel, who is a native of Imo State but was born and raised in Kaduna State, told the newspaper during an interview in Lagos , that he and members of his gang were perfecting plans  to abduct billionaire  businessman, Femi Otedola, before he was arrested.  He narrated that they missed him once when he attended a function at Ibadan Oyo State, due to heavy presence of security operatives, but they decided to take a little time and prepare properly for the operation.

During his interview, Daniel confessed that he joined the kidnap gang in 2014, after he was released from Oyo State Prison.

He explained that he was arrested in 2012 for hijacking a petroleum tanker truck on the Lagos-Ibadan express way and during his stay in prison; he met one Mohammed Babuga, a Fulani who eventually led him into kidnapping. He added that he usually negotiated for the gang after the kidnap of their victims because of his expertise in ensuring that the ransoms are collected successfully. Dainel, further explained that after Senator Iyabo was kidnapped, he was the one who ensured that the woman’s life was spared as her family refused to pay ransom for her release.

No reformation in prison

His story: “I spent one year in prison and my case was later struck out from court over want of evidence.  When I returned, I could not go back to school.   I was born and bred in Kaduna State and I speak Hausa Language fluently.  While I was in prison, I made friend with Mohammed who is a Fulani, we were in the same cell.  After my one year in prison, I realized that prison wasn’t a place for reformation and I that inmates were arranging jobs from the prison.   Mohammed came out of prison before me, but when I came out, he told me that he had joined a kidnapping gang.

“In 2014, I joined Mohammed’s gang and we kidnapped a man. I don’t know the man’s name and we kept him in a forest in Ilorin. We were paid N5million.   The second job was the kidnap of an Alhaji and  I did the negotiation in that case. We got N15million from the man’s family. I got N2million as my share; I bought a car with my share.  The third operation was in Kwara State and we kidnapped a man who identified himself as Akintola.  We received N3million as ransom from the family.  During the fourth operation, we kidnapped a man and N5million was paid as ransom.

“After that operation, my gang members kidnapped Senator Iyabo Anisulowo, but I wasn’t carried along.  I was in my house in Festac when I saw the news on the television and I called Mohammed to confirm the incident.   He told me that it was Maman and his   gang that carried out the job. They told me that they were expecting to get nothing less N50million. But, after the family of the senator refused to pay the money and there was police raid all over the place as most of Maman’s relatives and friends were arrested and, there were also police helicopters hovering all over the place, they called me threatening to kill the woman to serve as a deterrent to other would be victims.   I begged them for two days because they respect and listen to me.  Luckily for the woman, she was released and they all absconded.   That single effort I did saved the life of the Senator. If not, the Fulani boys would have hacked her to death.”

How he would have kidnapped Otedola in November

Narrating how he and his gang had planned to kidnap oil magnet, Femi Otedola, Daniel said; “There was someone working with Otedola who brought the kidnapping job to us and the person told us that he was going to be in Ibadan. When we went, we saw that there was heavy security presence around him and I told my gang members that we must wait and plan very well before carrying out the operation.

I told them that the first thing I would do to ensure the success of the operation was to do spiritual sacrifice to the gods and ensure that I defeat them spiritually before going for him.  You know a man like Otedola, is powerful spiritually.  Then, the next step was to ensure that we get army, DSS and police uniforms.

I realized without impersonation, there was no way I would be able to go close to a man of such statute.  Our last plan was to ensure that we monitor his movements regularly through our contact which is that person close to him and we would strike on a day that he has very little security men around me.  I would have achieved all this by November and if we had succeeded, it was going to be my last job as I would have demanded N2billion and I was hopeful he will pay me nothing less than N500 million.”

Daniel also disclosed that he made sure that he was always two steps ahead of security operatives by ensuring that he was acquainted with strategies of the DSS and the police in tackling kidnapping and other violent crimes.  “I have a friend who is into hacking and he helped me hack into DSS and police websites and through that process, I normally monitor their new tracking methods. Before I was arrested, I knew the police were looking for me but I believed in my knowledge of Nigeria security apparatus. But it failed me. “

Daniel’s accomplice, Mohammed Babuga, 32, a native of Kebbi State,  who is married with two children , confessed that he was first arrested in  2011  when he went for a robbery operation with Maman on the  Kaduna Road in Kwara State. “I used to take them to the scene and they paid me N156, 000 in three operations. During the third operation while taken them back to Ilroin, some vigilante men arrested us and took us to the police where we were charged to court and I was remanded in Prison.

While in Prison, I met Ike, but when I left Prison, I joined a kidnap gang led by Boeyi and Bubah Bube and we kidnapped a Fulani man. We got N4million and I was given N700, 000. We did our second job at Rejob, a boundary between Kebbi State and Niger.  We collected N2million and I got N250, 000.

After that operation, I left Kebbi and relocated to Oyo State because there were no good roads. Boeyi later called me and said he wanted to join me and he had gotten an Ak47 rifle and one Abubakar, a headsman also had a pump action gun.   We contributed money and bought a Honda Bullet.   Boeyi brought a job which was to kidnap a man, but before we went for the job,  Ike came and joined us and we did four jobs together before I was arrested. ”