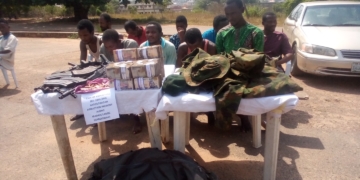 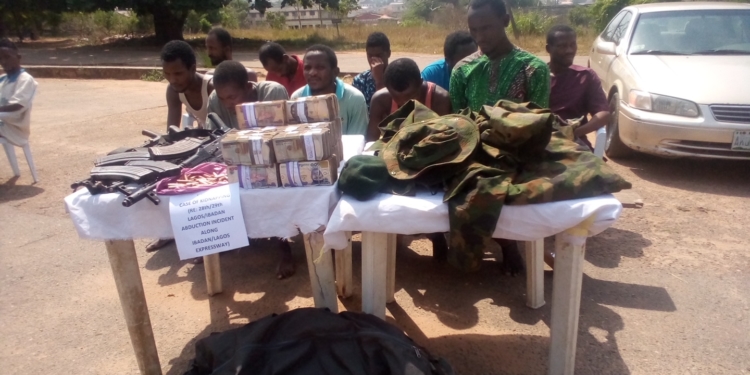 According to Osifeso, the suspects before their arrest attacked a team of policemen while responding to a distress call to rescue abducted victims on the highway. He said the incident led to the death of an Inspector of Police during a fierce gun duel with the bandits.

Osifeso added that the kidnappers later whisked their victims away to an unknown location through the thick forest along the Ibadan-Lagos expressway and contacted their relations for ransom.

“One of the most coordinated reconnaissance operations in the history of the command–all command’s operational, tactical and intelligence assets were collapsed and fused as one to attain the goal of immediate rescue of the abductees unhurt and the apprehension of their abductors for prosecution.

“The Oyo State Police Command in a technological intelligence-aided operation aided and with necessary support from Amotekun (the Oyo State Security Network) and other communal partners, apprehended the duo of Babangida Buhari Awalu and Kabiru Aliyu,  both commercial motorcyclists and couriers for the Kidnap syndicate while retrieving “exchange money” for other members of the syndicate around Ojoo Area, Ibadan.

“Further detailed and painstaking investigations led to the arrest of five members of the criminal gang. The other escalated findings led to the arrest ofthree additional suspects who gave their names as Adewuyi Sunday, Ayanwola Gbenga and Rafiu Abdulmajeed from Gbugbu area of Kwara State and Ago Are in Oyo State respectively.

“It was also discovered that monies received from the victims were moved into the bank accounts of these three additional suspects for onward distribution to other members of the kidnapping syndicate,” Osifeso said.

Recall that kidnappers have recently been abducting passengers travelling along the Lagos-Ibadan expressway. One of those abducted include Prof. Adigun Agbaje, a former deputy vice chancellor (Academic) of the University of Ibadan.