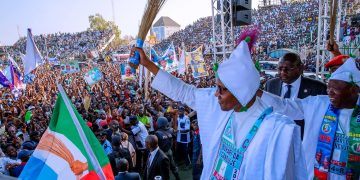 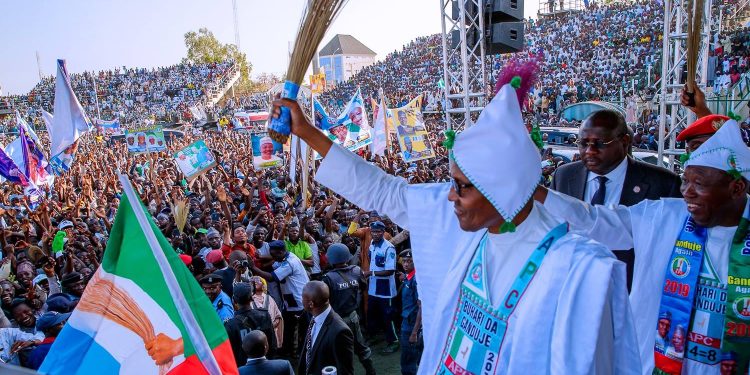 So, if our neighbours from Niger come to witness how President Buhari is doing his politics, what is the problem with that? Is there any law that is broken?

The quote above is from a statement issued by the Senior Special Assistant to the President on Media and Publicity, Garba Shehu, to defend the presence of some foreigners including two governors from Niger Republic at President Muhammadu Buhari’s campaign rally in Kano on Thursday.

The statement follows the condemnation by the Peoples Democratic Party (PDP), which is asking the All Progressives Congress (APC) to explain why it found it necessary to import governors from another country to participate in Nigeria’s electoral process at a time of serious security challenges.

The Director Media and Publicity of the PDP Presidential Campaign Organisation, Mr. Kola Ologbondiyan who addressed a press conference in Abuja Friday, said the appearance of “foreign powers” at Buhari’s campaign showed desperation.

The PDP said in their desperation, the APC and presidency had compromised Nigeria’s territorial integrity as a nation, adding that their action portends grave danger to national security and the sanctity of the electoral process.

“For a nation contending with insurgency and banditry, the involvement of mercenaries from neighbouring countries in the APC rally must be condemned by all and sundry. Already, there are apprehensions that miscreants who came from Niger Republic to President Buhari’s rally are being offered accommodation in our country by the APC to unleash violence immediately it is clear that President Buhari is losing the February 16 presidential election.

“On account of these, PDP demands an urgent and thorough investigation into the circumstances leading to the presence of politicians and thugs from Niger Republic at the APC presidential rally in Kano on Thursday.

“The APC and the Buhari Presidency must immediately explain the roles being played by Issa Moussa, Governor of Zinder and his counterpart from Maradi, Zakiri Umar both of Niger Republic, who were sighted decked in the attires and official logos of the APC, in our political affairs.

“Our security agencies must immediately investigate and lay in the public domain the circumstances leading to their presence, which more or less confirms that the APC has lost all domestic credibility and has assumed a desperate mode,” he said.

“The presence of the Niger Republic Governors at President Buhari’s rally signposts a direct assault on the credibility of the presidential elections. This is particularly against the backdrop of INEC’s plans to allow Internally Displaced Persons (IDPs) in that country to vote in our election, a situation that opens the way for aliens to infiltrate as IDPs and participate in our elections.

“Our apprehensions are accentuated by INEC’s recent mass creation of additional polling units which have not been properly designated and which may be deployed for the perpetuation of monumental electoral fraud. We note how Kano State, in 2015, delivered 1.9 million votes to the APC presidential candidate in circumstances devoid of transparency and credulity.

“Moreover, the promise by Governor Abdullahi Ganduje of Kano State to deliver five million votes to Presidential Buhari in the 2019 elections is predicated on the unfettered opening of our international borders to foreign political interests.

“What was the true purpose of the invitation of these foreigners to the APC rally in Kano on Thursday? What secret deals did APC leaders make with them at the expense of our national security?” he added.

Reacting, the presidency, through a statement by spokesman, Garba Shehu said:

On the issue of NIGER Republic Governors visit to Nigeria.

What we want PDP to know, there is a Buhari phenomenon that is sweeping across the entire continent. Candidates for national leadership in each country are doing whatever they can to understand the Buhari phenomenon, to copy it, to institute it.

That’s why people from the African continent…when they had the presidential election in Ghana, there was a candidate who branded himself the Buhari of Ghana.

When they had the presidential election in Chad last year, there was a Buhari of Chad. They had printed posters with their pictures with Buhari side by side.

So, Nigeria has been gifted with an honest leader, a man endowed with rare qualities and people are trying to copy that.

So, if our neighbours from Niger come to witness how President Buhari is doing his politics, what is the problem with that? Is there any law that is broken? Or did they see anyone that will buy vote or collect PVC?

So, it’s jealousy. They are panicky and jealous. It should worry PDP that nobody is coming across the border to understudy PDP.

The Director of the Presidential Campaign Council of the All Progressives Congress (APC), Malam Nuhu Ribadu, while defending the party’s action, said there is no law broken with the presence of the two governors from the neighbouring country.

For your information, it is a free world and it is the constitutional right of everyone to be where he wants to be. You have no right to curtail anybody from doing what he wants to do. People from West Africa are free to move into Nigeria. We have a protocol or agreement that they don’t need a visa to come into this country.”

You cannot and you have no right as a Nigerian to stop them from exercising their fundamental human right to identify with their friends. Their presence may or may not have any impact on the re-election, but they are entitled to it. We have to guarantee their freedom because their presence is within the law and we don’t have the right to stop them