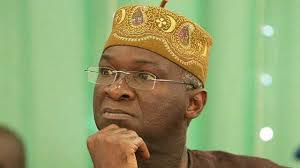 Minister of Works and Housing, Mr Babatunde Fashola, has disclosed how the ministry paid N151 million to Cartil Construction Limited for the rehabilitation of the Ife-Ifewara Road.

The Redeemed Christian Church of God had in a petition dated February 9, 2021 filed by Pastor Niyi Adebanjo on behalf of the General Overseer, Pastor Enoch Adeboye, accused the ministry of making payment to the tune of N151 million to Cartil Construction Limited for the rehabilitation of the road the church rehabilitated as part of its Corporate Social Responsibility (CSR).

He had alleged that the ministry paid the money between 2016 and 2018 to the contractor that abandoned the road which was actually reconstructed by the church at a cost of N181 million.

The RCCG therefore urged the Senate to direct Cartil Construction Limited to refund the money and ensure its payment to government coffer.

The church had said: “If anyone is to be reimbursed for the rehabilitation of the road; it should be the RCCG and not the contractor.”

But Fashola told the Senate Committee on Ethics, Privileges and Public Petitions on Thursday that the money was not paid between 2016 to 2018 to the contractors.

He stated that the contract for the road was awarded to Cartil Construction in December 2010 for N662 million as a constituency project executed under the Ministry of Works; five years before the administration President Muhammadu Buhari.

Fashola said contrary to the claims of RCCG, the ministry under him did not pay any money to the contractors between 2016 and 2018.

The minister also said there was no evidence to back up claims that the funds were not released in 2011 to Cartil Construction Limited.

“The Ife-Ifewara Road is not a federal road. It is a state road within Osun State in the South West Nigeria.

“It is a 6.3m wide single carriageway, 15km long with 1.5m earth shoulders on either side,” he said.

Fashola therefore demanded an apology from the petitioner for making false claims, hence forcing the Senate to spend tax payers money to organise the public hearing.

Adebanjo, who petitioned the Senate on behalf of the RCCG, tendered an unreserved apology to the Ministry for claiming that the the N151 million was paid to the contractors between 2016 and 2018.

The pastor also apologised to the minister and the ministry that the Church did not inform them before rehabilitating the road and for not doing proper enquiry before petitioning the Senate.

“I like to state very clearly that the core of this petition is not against the Ministry of Works and Housing.

“The basis for this petition is to call Nigerians to the corruption that is going on especially on road construction in this country.

“When Pastor E.A. Adeboye intervened, it was because his people called him. That road became a den of thieves and kidnappers. And when he was summoned, of course, we have a part to apologise for not going through proper procedure for the intervention.

“But the point being made is that Cartil Construction Nigeria Limited should be made to refund (money paid to it).

“We did a little to resolve this thing within the constituency itself, unfortunately we did not go further because of pieces of information that got to us.

“And on the basis of that we felt, erroneously though, that the best place for the society to hear us is here and that is why we came to this honourable Senate.

“Now as to whether certain funds were released after 2011, we do not have claims. What we got to know was that certain steps were taken.

“I would like to say with due respect to the minister, in view of what we have heard today, that steps are being taken to deal with construction companies in this country that through the back door deny this nation resources that should be made available to do great things that will benefit the common man.

“There is no doubting the fact that the Ministry of Works deserves an apology from us and because the whole world is listening to us, I tender that apology unreservedly before this Senate Committee.

“However, I am saying that those things he pointed out we agree point blank that it was our omission and it is not going to reccur on our future dealings on our interventions any moment we decide to do it.

“So, Honourable Minister, on behalf of Pastor E.A. Adeboye, I like to apologise to you for whatever this has brought to the government under your watch.

“However that apology does not in any way remove the fact which is the core of this petition that Cartil Construction Nigeria Limited should be made to refund every single kobo collected,” Adebanjo said.

The Chairman of the Senate panel, Ayo Akinyelure, and other members of the committee including Senators Smart Adeyemi, James Manager and Sam Egwu, however commended the General Overseer of the RCCG, Pastor Enoch Adeboye, for the timely intervention on the road.

INTERVIEW: Why Tinubu should not remain a kingmaker in 2023- Soji Akanbi