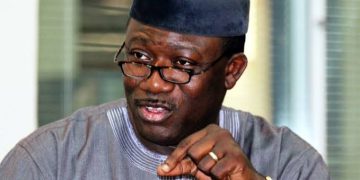 Ruga settlements: We’ll not cede our land to outsiders- Fayemi

Ruga settlements: We’ll not cede our land to outsiders- Fayemi 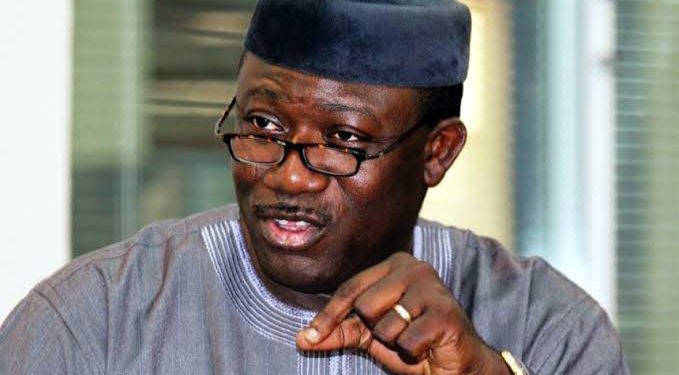 As indigenes and residents of several states across the country, especially in the South and Middlebelt, continue to oppose the Federal Government’s plan to establish Ruga settlements for Fulani herdsmen in some states, Ekiti State Governor, Dr. Kayode Fayemi on Monday assured the people of the state that Ekiti will not cede its land to outsiders.

Fayemi stated this when he paid a condolence visit to Orin-Ekiti in Ido/Osi Local Government Areas of the where a hunter, Emmanuel Ilori was murdered by suspected herdsmen while on a hunting expedition with some of his colleagues on Saturday.

News Agency of Nigeria(NAN) reports that the governor said the killing of Ilori, who was one of the All Progressives Congres(APC) leaders in the town saddened his heart.

The governor who spoke in Yoruba during the visit said investigation had commenced into the attack, saying everything possible would be done to arrest the perpetrators of the dastardly act.

Fayemi disclosed that traditional hunters and security agencies will henceforth work together to ensure adequate security for residents of the state.

He slammed those politicising the incident, stating that security is an issue that concerns everyone living in the state.

“It cannot happen in Ekiti except I am no longer the governor of Ekiti State and there is nobody that can be governor in Ekiti that will cede Ekiti land to outsiders because our land is not even enough for us.

“Adequate security of our people is what concerns me most in Ekiti and Nigeria and I want our people to ignore lies and falsehood some individuals are spreading around.

“There is nobody that will be governor in Ekiti that will allow outsiders to take over our communities from the people here or say that people coming from elsewhere should come and take over Ekiti.

“Those saying these are only playing politics with the matter. This is not politics; security is an issue that concerns all of us.

“Some individuals have been spreading baseless rumours to cause disaffection because they are no longer in power and it is their wish that Ekiti should be consumed by anarchy.”

He said his government have not stop working on how to secure the state, adding that his administration will do everything within its power to prevent a reoccurrence of the incident. The governor said he will deploy more security personnel to every parts of the state to ensure that residents can sleep with their two eyes closed.

“I want to assure you that our government has not stopped work on security. One of the steps is that our local hunters will work with our security agencies.

“Not up to three weeks now, our Kabiyesis and community leaders held a meeting and we deliberated on measures and ways to tackle security challenges.

“No single individual or group can do the work of security; the local hunters know their areas and terrains very well than the men of our security agencies and it will serve the people well if they work together.

“I am in Orin today to sympathise with you and tell you of the steps being taken by the government. There is no way we can be happy in Ekiti hearing that one of our people was killed more so when the victim was one of our party leaders in Orin.

“Since the incident happened on Saturday, you have seen more soldiers and policemen here in Orin and they are on the trail of perpetrators and we will not relent in our efforts until they are found.

“Government will do everything possible to prevent a reoccurrence of what happened and from now, you will see more security people not only in Orin but in other parts of Ekiti. They are not here to fight you but to protect you.

“Those responsible for this shall be made to face the full wrath of the law. Other steps that will be taken will be revealed in due course,” Fayemi said.

The governor said he felt a sense of loss with the people of the town and urged them to be peaceful and law abiding as investigation into the killing continues.

Fayemi stated that his administration will fully participate in Ilori’s burial and promised to assist the family he left behind.