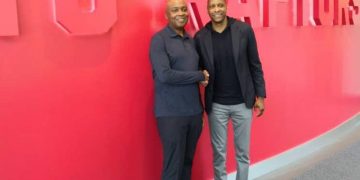 Saraki teams up with Toronto Raptors President, others, to build basketball facilities in Nigeria

Saraki teams up with Toronto Raptors President, others, to build basketball facilities in Nigeria 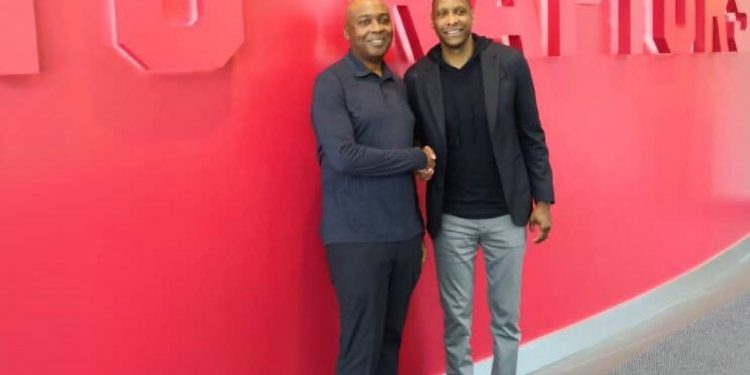 Saraki with Ujiri of Toronto Raptors

After losing his bid to return to the Senate, former Senate President, Bukola Saraki, seems to be taking time off politics to explore other interests.

He disclosed on Thursday that he is working to see the proliferation of basketball training facilities in Nigeria.

He made the disclosure after spending time at the training facility of Canadian and NBA giants, Toronto Raptors, where a Nigerian, Masai Ujiri, is President.

The senator said on Twitter that he has committed to work with Ujiri and his Giant of Africa foundation, to build basketball facilities in different parts of Nogeria in order to create more opportunities for more Nigerian talents.

He tweeted: “Yesterday, it was a pleasure to spend some time at the Toronto Raptors training facility and meet with Masai Ujiri, the Nigerian-born President of the organisation. What a state of the art facility! Congratulations.

“I was pleased to hear about Masai’s @GiantsOfAfrica Foundation that works to create a pathway for the continent’s underprivileged youth through sport with the goal of growing the game of basketball within Africa.

“With basketball facilities in Rwanda, Kenya and other parts of the continent, I mentioned to Masai that it would be great for his @GiantsOfAfrica foundation to augment it’s basketball clinics by building similar ones in Nigeria.

“I have committed to work with himself and other well-meaning Nigerians to build similar basketball facilities in different parts of the country. This will create more opportunities for our young talented Nigerians.”

Saraki’s interest in sports is not new. He is the owner of Ilorin based football club, ABS FC which he acquired in 2011. The team is currently in the Nigeria National League (NNL).