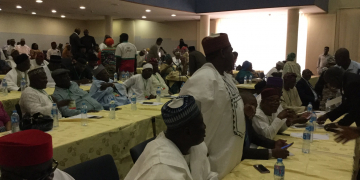 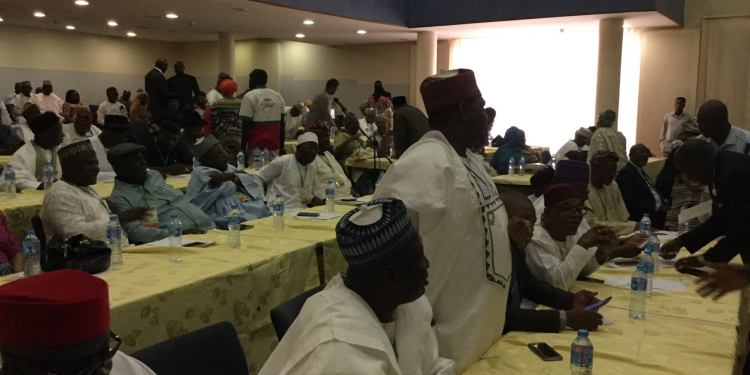 Sheriff, who got to the venue of the meeting a few minutes after Jonathan had delivered his remarks, walked out with members of his National Working Committee at about 4.15 p.m.

Some of the executive members with him were the Deputy National Chairman, Dr Cairo Ojougboh and the Publicity Secretary, Mr Mikko Bernard.

Sheriff, addressing newsmen before leaving, expressed displeasure for not being allowed to make the opening remarks.

“We are here for PDP stakeholders meeting and the PDP has only one national chairman, which is Ali Modu Sheriff.

“There is no PDP meeting that will take place under whatever arrangement that will not open the session as national chairman;. Today, I’m the most senior member of this party.

He also said that he would not be party to anything outside the reconciliation report submitted to him by Gov. Seriake Dickson of Bayelsa.

“I think Gov Dickson made a proposal for reconciliation that we have accepted. Some people want to deviate from this programme, to bring agenda which was not part of it.

“As national chairman of the party, what I told you in my office when Dickson brought the report is the only thing that we have agreed to at this moment.

“I will not be party to anybody using me to do another programme. I’m not going to be part of it”, Sheriff said.

Asked about the way forward for the party, Sheriff said: “As the National Chairman of PDP, I will move on with the programmes initiated by Gov. Dickson.

“We are continuing with that; anything outside that, I’m not a party to it.”

The News Agency of Nigeria (NAN), reports that the meeting however continued after his walk-out.

Jonathan, speaking on the outcome of the meeting, regretted what happened during the meeting.

According to him, the issues will be addressed once the committee comes out with its own recommendations.

NAN also reports that both Sheriff and Makarfi were scheduled, in the agenda of the meeting, to deliver goodwill messages.

Also present were some PDP governors, former ministers, and the BoT members, among others.