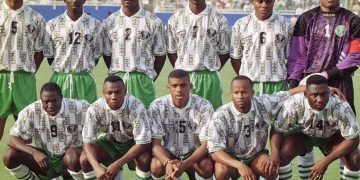 Super Eagles class of 94: Where are these players now? A look at their lives 25 years after

Super Eagles class of 94: Where are these players now? A look at their lives 25 years after 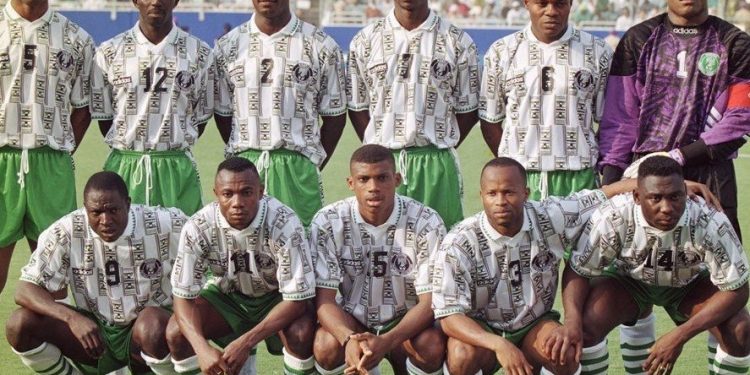 The members of the prestigious 1994 Super Eagles squad were honoured on Monday at the Nigeria Football Federation(NFF)- Aiteo awards for their exploits at the Tunisia ’94 African Cup of Nations(AFCON) and the U.S.A ’94 World Cup.

AFCON 2019: Real reason I was sacked by Tanzania- Amuneke

The team won Nigeria’s second AFCON title, delivered Nigeria’s first ever world cup ticket and won the 1995 Afro-Asian cup competition. Their performance was so brilliant that FIFA ranked Nigeria fifth best football playing nation in the world in April 1994. It was the highest FIFA ranking an African football nation has ever gotten.

What are the members of this team doing presently? Apart from the few of them who have made a name for themselves in the coaching profession, little or nothing is known about other members of the team.

In this report, Newspeakonline takes a look into the lives and careers after football of these once great players:

Uche Okechukwu
Not much has been heard of him since his retirement in 2008. Although he launched a football academy in Aba, Abia State in February 2018. He is reported to have stocks, properties, yachts and private airplanes. He also alluded to the fact that he takes hunting seriously, especially in Abia, his home state.

He lives in Turkey where he had most of his playing career. He was honoured as the foreign player who played in Turkey for the longest period of time (13 years). He obtained a Turkish citizenship under the name Deniz Uygar.

Peter Rufai
Since his retirement in early 2000, Rufai has been shuttling between Europe and Nigeria. In 2001, he set up an academy in Spain for goalkeepers and also started a football academy in Nigeria in 2009.
He has also been working in the technical development department of various European football federations especially the Belgium Football Federation and some African countries.

Mutiu Adepoju
Adepoju ventured into private business and football administration after retiring from active football. His business interest includes oil and gas and real estate.
He is presently the country manager for La Liga in Nigeria and was a former General Manager of Shooting Stars football club of Ibadan.

Austin Okocha
Okocha delved into business and football administration after his retirement in 2008.
He built a night club named “Club 10”. He was elected chairman of Delta State Footbal Association in March 2015. In June 2016, he founded Jay Jay Okocha Football for UNITY Competition.
He presently works with Bundesliga Legends Network to improve awareness of the league within key target markets.

Sunday Oliseh
After his retirement in Januay 2006, Oliseh went to England for three years and obtained his UEFA coaching badges and a diploma in Business Management.
He had coached the Super Eagles of Nigeria and Fortuna Sittard in the Netherlands. He is a football pundit in Belgium where he lives, a consultant for CNN international in Germany and a member of FIFA’s technical study group.

Finidi George
He retired from active football in 2004 and not much was heard of him until he was appointed as Real Betis’ Director of international football in November 2010, a position he has held till date.

Benedict Iroha
After retiring in 2000, he coached in the youth department of FC Dallas in the United States. He was an assistant with the Nigerian U-17 team that won the 2007 FIFA U-17 World Cup and recently worked as Head Coach of Dolphins FC in Port Harcourt. He is currently one of the coaches of Heartland FC of Owerri.

Amunike worked as a football scout for Manchester United after retirement. He has also coached several teams home and abroad after obtaining his coaching license in Europe.
He led Nigeria to the U-17 world cup triumph in 2015 and he is presently the head coach of Tanzania’s national team.

Daniel Amokachi
Amokachi turned to coaching after retiring in 2005 and managed Nigerian clubs Nasarawa United and later Enyimba FC of Aba.
On April 10, 2008, Amokachi was re-appointed into Nigeria’s national team, the Super Eagles, as assistant coach to late Shuaibu Amodu, and then as assistant to late Stephen Keshi.
In 2015, Amokachi managed FC Ifeanyi Ubah, resigning after five weeks in the post. In January 2016, he was appointed as manager of JS Hercules in Finland. He holds the honour of being the first Nigerian to manage an European team.

Samson Siasia
Siasi coached Nigeria’s U-20, U-23 and the Super Eagles between 2005 and 2016, winning Olympic silver and bronze medals. He also won the African Youth Championship in 2005 and finished as runner up to Argentina at the 2005 U-20 World Cup.
He runs a football academy called SiaOne in Abuja.

Micheal Emenalo
After his retirement in 2000, Emenalo went back to school to study sports science. Afterwards, nothing was heard if him until he joined Chelsea football club in 2007. After the departure of Ray Wilkins, Emenalo was promoted from his position as chief scout to assistant first team coach on 18 November 2010. On July 8, 2011, Chelsea appointed Emenalo as Technical Director of the club. His responsibilities included heading the scouting and academy programmes.
On June 10, 2013, he formally requested that his contract be terminated to facilitate the return of Jose Mourinho. His request for termination was denied.
He eventually resigned as technical director of the club on November 6, 2017.
Emenalo joined AS Monaco as its sporting director on November 27, 2017 and was sacked on January 22, 2019. He has since returned to the United States of America where his family lives to spend time with them.

Victor Ikpeba
The 1997 African footballer of the year embraced a private life after he retired in 2005.
He shuttles between Nigeria and Monaco in France where he lives with his three children.
He occasionally works as a football analyst for a satellite sports television channel in Nigeria.

Chidi Nwanu
Since his early retirement in 1998, he has kept a low profile and nothing has been heard about him since then.
He is now a pastor in the United States of America.

Efan Ekoku
After retiring in 2004, Ekoku obtained all England Football Association(FA) and UEFA coaching badges and also moved into the media.
He currently works as a commentator for Premier League Productions, which produces the world feed commentaries. He was picked to be match analyst for the 2010 FIFA World Cup, working for ESPN. In 2013, he appeared as a pundit for the BBC’s coverage of the FIFA Confederations Cup.
Also, he is currently a weekly guest on Football Dynamics on Bloomberg Africa.

Nduka Ugbade
Ugbade was the captain of Nigeria’s U-17 team that won Africa’s first major trophy in football on the global stage at China ’85 U-17 world cup.
After retiring in 2002, he took up coaching.
In August 2011 he was appointed by the Nigeria Football Federation (NFF) to be one of the two assistant coaches for the Golden Eaglets (Nigeria under-17 national football team). In 2013, the team won the silver medal in the CAF U-17 tournament in Algeria and won the 2013 FIFA U-17 World Cup in the UAE.
Ugbade is currently the assistant coach of the U-17 national team(Golden Eaglets).

Edema Fuludu
Fuludu delved into football administration after retiring from the game.
Armed with a bachelor degree in Business Administration from University of Benin, he is presently the Vice Chairman of Delta football association

Emeka Ezeugo
Ezeugo holds a US Soccer Federation coaching license and a KNVB Netherlands international license. Ezeugo has had an envious coaching record over the years, as he successfully completed his transition from player to coach after quitting football in 2001. He was the head coach at CoT NYs Borough of Manhattan Community College in 2002. In 2003, he coached Deportivo Municipal in Peru for two seasons before coming back to the United States. He was the coach of New York City College of Technology between 2005 and 2008.
Ezeugo spent summers 2004-2006 coaching at Camp Chateaugay, a summer camp located in New York’s Adirondack Mountains for kids between the age of 7 to 15.
On April 19, 2008, he went back to India and signed a contract as head coach with his former club, Churchill Brothers SC but was released from his contract on September 5, 2008.
Between October 31, 2013 and February 23, 2014, he was the head coach of Abia warriors in the Nigerian Premier League.
He presently lives in New York where he runs a business.