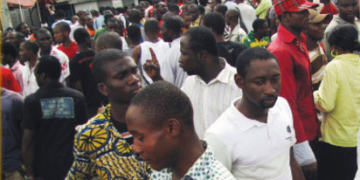 The youth and the state of the Nigerian nation, by Tunji Olaopa

The youth and the state of the Nigerian nation, by Tunji Olaopa 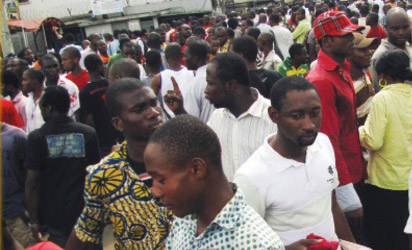 Coronation of Olu of Warri and Nigeria’s Renaissance, By Tunji Olaopa

Since the signing of the “Not Too Young to Run” Bill in Nigeria in 2018, the simmering issue of the involvement of the youths in the political space of the Nigerian state has burst into the public political consciousness. The Nigerian predicament has a youth dimension which, since independence, has not been adequately attended to in the light of what we often regard as the big problems Nigeria is facing—ethnicity, religious fundamentalism, economic underdevelopment, and so many others. It does not yet seem clear to us that the youth represents a veritable bulwark between the horror of the past and the brightness and possibilities of the future.

The youths of any nation represent the major human capital asset which the nation can harness for economic and development purposes. The demographic profile of Nigeria favors the argument that it is dangerous for any nation to ignore the largest segment of its population especially if that segment is below 35 years of age. This is because the youth constitutes the workforce of any nation. What is considered the youth bulge, in demographic studies, refers to a population phenomenon in which the largest share of the population comprises children and young adult of working age. This means that at a particular juncture, a state has more than half of its population that is ready to enter the working class. This is made possible when the infant mortality rate of such a country reduces while the fertility rate of her women increases and there is no deliberate policy to control population size and growth. This is the situation for Africa at present. The continent, currently estimated to have a population of 1.28 billion people, is the most youthful continent in the world.

In Nigeria, the seventh most populous country in the world, the total population is currently estimated at 195 million. This is further projected to reach 236 million by 2030 and 410 million by 2050 to become the third most populous country in the world. Yet, Nigeria has a median age of 18.4 years of age. This represents nearly 70% of its population under 30 years. Unfortunately, this demographic statistics does not translate into a development variable because Nigeria’s development policy does not deliberately and successfully factor the youths into its economic policies yet. The reason for this stem solely from the grim youth unemployment figure in Nigeria that has confounded the jobless non-inclusive growths the nation has recorded. By the second quarter of 2018, the youth unemployment rate was at an all-time high of 38%. This decreased to 36.50% by the third quarter. This figure essentially raises the spectre of an impending “Nigerian Spring” that will unleash the explosive youth energies into a violent outburst we may not be able to control. This is a dynamic energy that ought to be harnessed for development purposes.

How did we get here? The simple answer is that successive Nigerian governments have not yet properly come to terms with the significance of the youth problem as a major development factor in postcolonial Nigeria. Consider the following essential questions that bear out this reflection about the state of the youth in national thinking: How many political parties in Nigeria have a youth wing that contributes to internal party policy? How many civil society groups are committed to youth development beyond the mere lip service to their significance? How many religious organisation, for that matter, look to the spiritual rejuvenation of the youth beyond the mere number that attends the church or the mosque? How many organisations are dedicated to youth empowerment in Nigeria? In what sense have the youth been integrated into national decision-making process? Is there any longer active student movements that would challenge national injustices and political brigandage?

Within this context of the lack of a radical youth presence like the Nigerian Youth Movement (NYM) of the pre and immediate post-independence years, the “Not Too Young to Run” Bill is a significant intervention in the worries of leaving the Nigerian youths and their enormous development energies free-flowing for negative use. But, however laudable this effort of government is in passing the Bill into law, the best that we can say, for now, is that the Bill serves only as a means to some other deeper ends of youth political empowerment and development participation in Nigeria. The Nigerian youths, compared with their fore-parents, have been left too long in the cold to just be thrusted into political responsibilities without considerations for present historical circumstances. While the Nigerian nationalists had political responsibilities handed over to them at their early age, the present crop of youths have been consistently excluded to the point of frustration and political irrelevance. In fact, the present reality is that the political leadership in Nigeria find the youths only useful as cannon fodder for electoral malpractice, frauds and violence. The politicians exploit the youths as agents of social and political destabilization. The youths are therefore caught between the devil of leadership failure and the deep blue sea of failed mentorship.

I see the fundamental challenge in this predicament as that of the breakdown of the value system. Whether we recognize it or not, the kind of moral dynamics around which the older generation constructed their characters has almost totally disappeared. From the family to the schools and colleges, and even down to the various religious institutions, values serve little or no purpose again in achieving a societal order around which progress and development can be hinged. What is rampant is an individualist and self-serving dynamics that undermine collective aspirations—“everyone for himself; and God for us all!” Thus, though highly intelligent, educated and energetic, the youth’s resourcefulness has been diverted into all manner of social vices, from Yahoo Yahoo criminality to gangsterism.

Long story cut short: Nigeria has reached a significant crossroad in her development effort. At this juncture, Nigeria will either break forth into a development dynamism that will make her a significant global player (with her youth bulge as a significant bargaining chip) or we will miss this opportunity and keep regressing. The “Not Too Young to Run” Bill can serve as a starting framework for further reflections on how to make the Nigerian youths political and development partners. However, fundamentals must precede cosmetic policies. First, the human capital capacities of the youth depend a lot on the government’s willingness to capacitate the, educationally and professionally. In moderating between the relationship between certificates and competences, the Nigerian government must give attention to educational policies and programmes that will reposition the youths as critical players in the human capital development scheme. Put in other words, the Nigerian government must prepare the Nigerian youths to be capable human capital.

For example, apart from the National Youth Policy (which Nigeria is still struggling to implement), a correlated policy direction would be the establishment of a Youth Development Index (YDI) that will serve as the institutional framework for monitoring the vision and policy of government on the youth. The YDI will have such implementational pillars like: (a) a paradigmatic rethinking of the educational system in a way that will encourage the training of a crop of youths that is entrepreneurial, creative, skilled and self-reliant; (b) significant structures that encourage policy research and intelligent networking with the youths, using the social media and other communication technologies, on how the youths can be drawn into their own empowerment; (c) the creation of collaborative strategies that facilitate self-sustaining and inter-generational dialogues and conversations that embolden the youths to speak about their sociopolitical conditions and aspirations while also engaged in a fruitful conversation about the past and the present; (d) better coordination and harmonization of the numerous scattered youth empowerment and job creation programmes littering different MDAs, States and LGAs; and (e) the setting up of a national evaluation dynamics which monitors accountability, quality control and the efficiency of the policies and programmes on youth empowerment, political participation and human capital development.

It should be clear to us all that the youths cannot be absolved from playing a significant role in their own absorption into political relevance in Nigeria. I must salute the courage of the youths that helped facilitated the “Not Too Young to Run” Bill. However, there is more to be done. And one way to get to the logical conclusion of the matter for which the Bill is just a commencement is for the Nigerian youths to mediate their “virtual citizenship” with a healthy and patriotic dose of civic and political visibility and participation at the local and national levels. Active citizenship involves a politically sophisticated agency that enables the youths to discern what their visions are vis-à-vis the task of democratic governance in Nigeria. This active agency demands that the youths challenge any form of tokenism that is thrown at them in the form of political participation. It becomes imperative for the youths, as active participants in the determination of the future of Nigeria, to interrogate the anti-democratic and anti-development agenda of any government, face down the youths’ own complicity in the status quo, and champion a thinking-out-of-the-box dynamics that will rescue Nigeria from political and socioeconomic orthodoxy.

The cat is already out of the box! The youths can no longer be neglected in the considerations about the future of Nigeria. The youths are the leaders of tomorrow, and that tomorrow has arrived. In steering the national course away from the impending possibility of a Nigerian Spring, the government can only commence its empowerment of the Nigerian youths through an urgent dialogue with that largest segment of the population which before now have been simmering in irrelevance. This is one policy directions which most nations of the world have already discovered. It is still not too late for us to make our own demographic discovery.