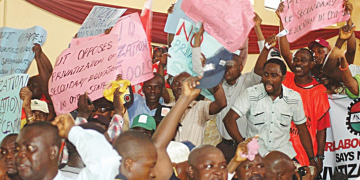 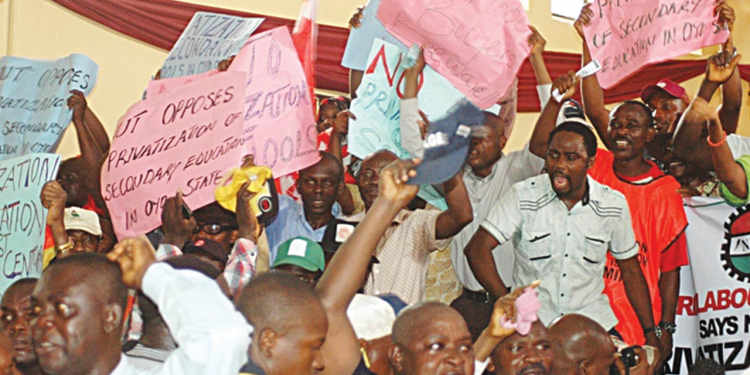 The Trade Union Congress (TUC) in Oyo State has vowed to embark on mass action if a 15-day ultimatum to improve workers’ conditions issued the state government expires without any positive move.

The TUC Chairman, Mr Emelieze Andrew, told the News Agency of Nigeria (NAN) in Ibadan on Tuesday that urgent steps must be taken by states and the Federal Government to deal with the situation.

Lamenting that the economic challenges were biting hard on Nigerian workers, Andrew advised governors finding it difficult to pay salaries to rise up to the challenge or consider resignation.

He recalled that Monday’s protest in Ibadan was against the backlog of arrears of promotion entitlement, gratuities and pension owed Federal Government workers.

“The economy is bad to the extent that a litre of kerosene is now N200 and people are no longer finding it easy to cope with life.

“This is the reason why we are pleading with President Muhammadu Buhari to work hard to restore the economy back to the path of growth.

“We also appeal to governors, who are unable to pay workers’ salaries, to seek assistance from the Federal Government or evolve other strategies’’

NAN recalls that TUC members, however, did not join the ongoing strike action in Oyo State.

The Nigeria Labour Congress in the state had declared an indefinite strike over the non-payment of salaries and government’s education policy aimed at promoting private participation in the management of schools.

The NLC is also seeking the withdrawal of the criminal suit instituted against some labour leaders over alleged destruction of public property in Ibadan.

MUST READ! Osinbajo replies Afenifere: What do you mean by "restructuring?"