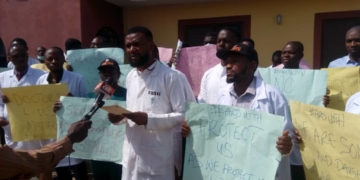 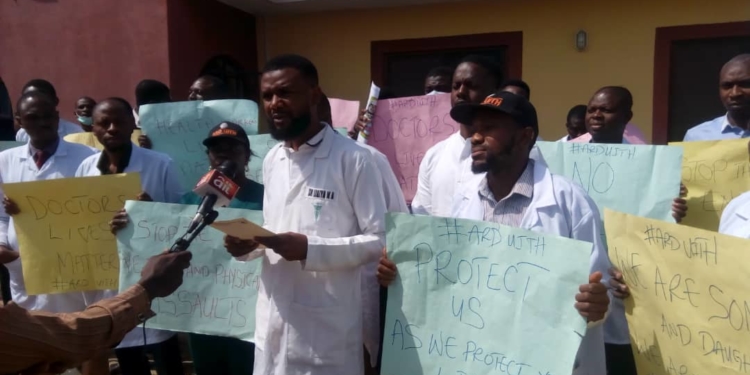 Members of the Association of Resident Doctors (ARD), University of Ilorin Teaching Hospital (UITH) chapter, on Friday, began a five-day strike to protest the beating of a doctor by relatives of a deceased patient.

The hospital management had seized the corpse and arrested one of the deceased’s sons, Mustapha Saliu, for allegedly partaking in the beating of the doctor, on Wednesday.

The doctors, who sang solidarity songs while the protest lasted, also carried placards with inscriptions such as “ARD says no to violence”, “health workers lives matter” and “protect us as we protect you.”

Addressing newsmen during the protest, the President of ARD-UITH, Dr Mubaraq Ijaiya, said the strike was “total,” adding that the doctors are demanding the presence of armed security personnel at all emergency points within the hospital for the safety of their lives.

“This is one of several episodes of physical assault on members this year with no culprit prosecuted to a logical conclusion and several other assaults that have occurred on healthcare workers in the last few months within the hospital,” he said.

According to Ijaiya, the patient was a known individual at the facility, who is being managed for a terminal illness.

“He was rushed to the emergency unit of the hospital on December 27th at about 7am. He was promptly attended to and admitted for emergency management by the medical team on emergency duty.

“The necessary management plan was prescribed including some required investigations and his primary managing team was notified through a written consult and phone call,” he said.

Ijaiya further explained that contrary to information making the rounds, the patient was alive and was stabilised by the same doctor when the relatives assaulted him.

He added that “unfortunately despite the best efforts of the managing team, the patient passed away in the early hours of Thursday.”

He consoled the family over the loss and recommended the immediate provision of posters and banners all round the hospital to discourage any form of assault on healthcare workers.

She stated that the management would do all that is necessary, including legal redress to solve the problem.

She noted that incidents of attacks in the past led to serious injuries on healthcare givers, adding that the management of the hospital would no longer tolerate any of such harassments and assaults from patients’ relatives and friends.

Ajiboye said the management had reviewed the matter and magnanimously release the corpse to the relatives for burial.

“However, further investigations and possible prosecution of the arrested persons linked with the doctor’s assault would continue to its logical end,” she added.