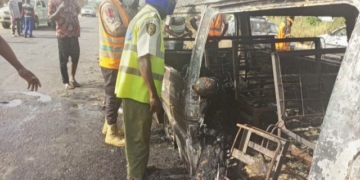 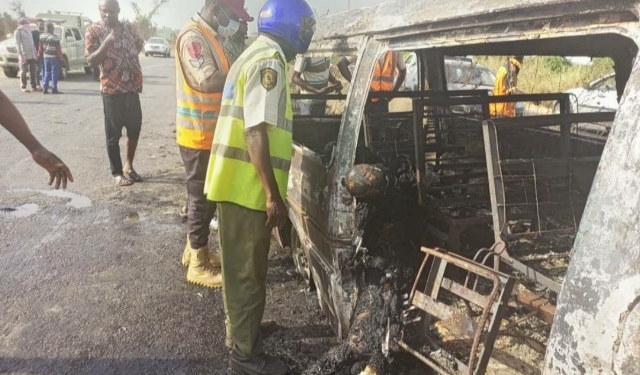 No fewer than seven persons were burnt to death while seven others sustained injuries in a vehicle explosion around Odogbolu junction, along the Sagamu-Benin expressway, Ijebu-Ode, Ogun State.

It was gathered that the accident happened when a 15-passenger Mazda bus with number plate, AGL 886 YD, burst into flames due to engine oil overflow along the highway.

The Public Relations Officer of Traffic Compliance and Enforcement Corps in the state, Babatunde Akinbiyi, confirmed the incident in a statement, adding that the explosion occured around 2.50pm on Wednesday.

Akinbiyi said the corps learnt from an eyewitness that the vehicle was coming from Kosofe area of Lagos, inbound Epe, for a church revival when its engine caught fire.

“The number of passengers in the commercial bus was 15, out of which seven females were burnt to death, while the remaining seven were seriously burnt and taken to the Ijebu Ode General Hospital for treatment.
However, the driver of the bus escaped.

“The accidented Mazda bus has been taken to the Odogbolu Motor Traffic Division,” he said.

Akinbiyi urged motorists to maintain and service their vehicles regularly.