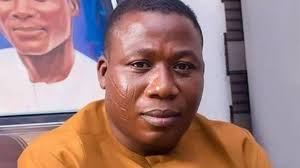 Yoruba activist, Sunday Adeyemo, popularly known as Sunday Igboho, has described those who attacked his house in Soka area of Ibadan Tuesday morning as cowards and conspirators with Fulani criminals.

He also explained the reason he moved to dislodge criminal herders from Igangan, saying he was out to free Yoruba land from criminals who are killing, maiming, robbing and raping Yoruba people. He said Igangan people are his relations as they bear the same face marks.

Adeyemo also berated Sen. Babafemi Ojudu over his write-up on social media. He denied ever meeting Ojudu and challenged him to swear by his biological children that his claims in the write-up were true.

He, however, expressed surprise that some Yoruba people were conspiring with Fulani criminals to attack him.

The activist said Ojudu’s move was part of the plans to distract him from freeing Yoruba from oppressors, assuring that he would not be distracted.