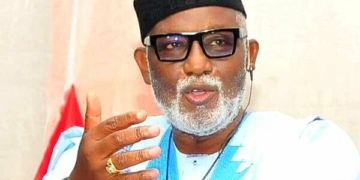 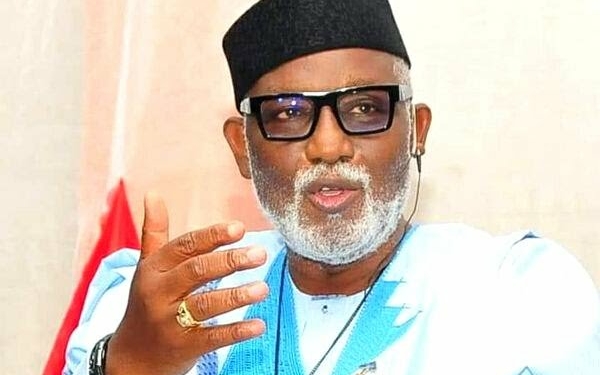 Ondo State Governor and chairman, South West Governors’ Forum, Arakunrin Rotimi Akeredolu, has warned those agitating for Oodua nation to perish the thought, saying many lives have been laid down for the unity of the country.

Akeredolu stated this in Akure at the flag off of the 2023 Armed Forces Remembrance Day celebration, on Friday.

He warned that states in the South West would not allow any agitation that could scuttle the sacrifices of the nation’s heroes.

The governor stated that a repeat of the outlawed Indigenous People of Biafra (IPOB) in the south eastern part of the country would not be tolerated in Yoruba land, declaring that no sit-at-home order would be tolerated in any state in the region.

“Those clamouring for Oodua nation will not succeed. People have not laid down their lives for this country for unscrupulous individuals to scuttle it. This country is very important to some of us.

“We recognise the right of the people to protest or agitate. But if the police feel your actions are treasonable, they will arrest and prosecute you.

“It is not at this stage in the history of this country that we will repeat IPOB in Yoruba land. Opportunity beacons at us, we cannot afford to throw away that opportunity.

“We must work to ensure that there is power shift. The opportunity for presidency to come to the south, especially the South West, is around the corner.

“We will not sit down and support anyone clamouring for Oodua nation. We will not support it. We have fought for this with everything we had, Nigeria will be good.

“The security agencies will checkmate these unscrupulous enemies embarking on such frivolous activities.

Akeredolu saluted the selfless service of the heroes who laid down their lives in wars and peacekeeping missions around the world and those currently serving, day and night, to guarantee the peace and unity of the country.

According to the governor, special recognition must be accorded the gallant military men who have been involved in the war against all forms of terrorist activities in the North East, North West and other parts of the country and who have, in the process, paid the supreme sacrifice.

He reiterated that his administration will continue to work with governmental and non- governmental organisations, as well as officers and men of the Armed Forces and the legion to ensure improved welfare for legionnaires, widows and dependants of departed ones in the state.

He commended the Nigerian Legion for their steadfastness, perseverance and exemplary conducts as they continue to contribute to the growth and development of the country, particularly in the area of security.

The governor disclosed that the current posture of the enemies of the country, which has cost the nation the lives of “many of our gallant soldiers, is highly condemnable,” stressing that the sustained effort of the officers and men has checked the threat by “the unscrupulous elements.”

“Without the sacrifice and commitment of these officers and men of the Armed Forces, it would have been a matter of time before the whole country is overrun.

“The month-long Armed Forces Remembrance Day celebration is, therefore, a golden opportunity for government and the society at large to empathise and associate with widows and relations of our fallen heroes, especially those that were cut down in their prime.

“The onus is on us to soberly reflect on the plight of these categories of people and re- solve to ensure that they live socially acceptable lives.

“It should be noted that the major reason for the Emblem Appeal Fund is to provide financial and material support to families of the fallen heroes as well as veterans who survived various military operations with some varying degrees of injuries that had rendered them incapacitated.

“There is nothing too good or too much that we can offer that could replace the precious lives lost or remedy the deprivations and untold hardship suffered by the de- pendants of these heroes,” he added.