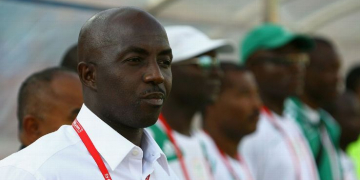 Why we can’t pay Siasia – NFF

Why we can’t pay Siasia – NFF The Nigeria Football Federation (NFF) has explained why the salaries of Dream Team VI coach, Samson Siasia have not been paid despite the expiration of his contract with the football house.

The NFF Secretary-general, Dr Mohammed Sanusi, said the stringent procedures of the Treasury Single Account (TSA) were responsible for the delay

“We have held meetings and we are waiting for the money. The money is already there in our account but we need to regularise the TSA procedures before we can claim the money. We are almost through with the process. Once that is concluded, we will pay them,” Sanusi assured.

“The NFF admits owing Siasia, but I believe you must have read about certain money from CAF ear-marked to pay him and his assistants. It had to go, first, into the TSA, because of the FG’s policies. Siasia should be able to credit the NFF for getting his team friendly matches, invitational tournaments and the camp in Atlanta.

“If Siasia does not appreciate anything at all, he should be able to appreciate the job he had to do for 22 months and that he was paid for 17 of those months. He will get his five months’ salary arrears (NFF Management are also being owed five months).

“NFF has never meant evil for him”