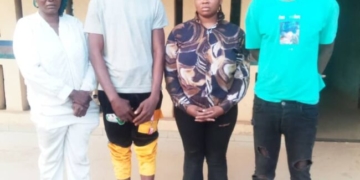 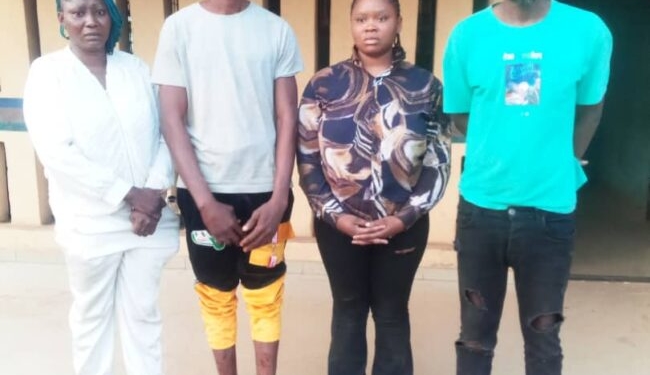 The Ogun State Police Command has arrested four suspected internet fraudsters, popularly called Yahoo boys, for abducting their colleague over the distribution of proceeds of their illegal act.

The suspects, according to a statement on Thursday by the command’s spokesperson, SP Abimbola Oyeyemi, were arrested at Orile Imo village, in Obafemi Owode Local Government Area of the state, following a report made at the Owode Egba Divisional Headquarters, that one Haruna Usman, was being held hostage somewhere in the area.

The Divisional Police Officer in charge of Owode Egba Division, CSP Popoola Olasunkanmi, upon the receipt of the information mobilised his men and burst the hiding place of the suspects, which led to the arrest of four persons while two escaped from the scene.

Oyeyemi revealed that the victim and those arrested were Yahoo boys in the same gang.

This development infuriated his colleagues, hence their resolve to kidnap him in an effort to draw more money from him.

“Preliminary investigation revealed that the victim and the suspects belong to an internet fraudster syndicate and that they recently swindled somebody whose identity is not yet known of the sum of twenty-six million, four hundred and thirty-seven thousand, nine hundred and fifty naira (N26,437,950), but the victim only gave the sum of N2,200,000 to his other colleagues, claiming that the money has not been paid completely by their client.

“This infuriated his colleagues who then lured him to a herbalist’s home at Orile Imo and held him hostage there since Thursday, 22nd of December 2022, with a threat to kill him there if he refused to give them their complete share.

“But while they were there, information got to the police who moved in, rescue the victim and apprehended four of the abductors, while others escaped,” he said.

Meanwhile, the Commissioner of Police, Lanre Bankole, has directed that the suspects be transferred to the anti-kidnapping unit of the State Criminal Investigation Department (SCID) for further investigation and possible prosecution.