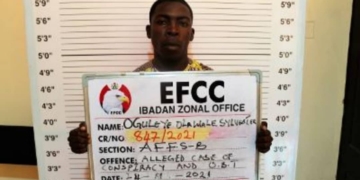 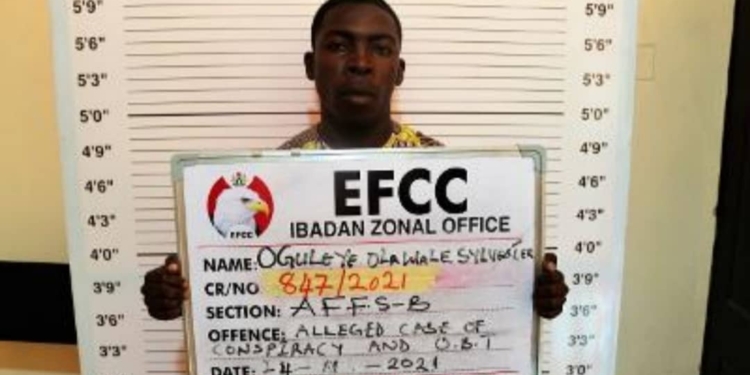 The Ibadan Zonal Command of the Economic and Financial Crimes Commission (EFCC), on Tuesday, secured the conviction and sentencing of one Ogunleye Olawale Sylvester to six months community service before Justice Ladiran Akintola of the Oyo State High Court, sitting in Ibadan, for internet fraud.

A statement by Wilson Uwujaren, EFCC’s Head of  Media and Publicity,  said the convict is a second year student of Olabisi Onabanjo University (OOU), Ago Iwoye.

Uwujaren added that Ogunleye was among the suspects arrested by officers of the Nigerian Army and handed over to the EFCC for prosecution.

The convict pleaded guilty to one count charge.

The count read: “That you Ogunleye Olawale Sylvester on or about 11th November, 2021, at Ibadan, within the jurisdiction of this honourable court, with intent to defraud, impersonate David Miguel, a white man from United States of America.”

Upon his plea, the prosecution counsel, Sanusi Galadanchi, reviewed the facts of the case and tendered indicting documents as evidence. He thereafter urged the court to convict and sentence the defendant as charged.

Consequently, Justice Akintola convicted and sentenced Ogunleye to six months community service and ordered that he restitute the sum of $550, and  forfeit one Tecno Spark 3 mobile phone to the Federal Government of Nigeria.