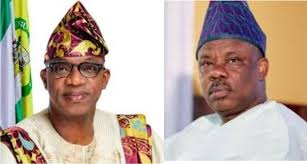 The crisis rocking the All Progressives Congress (APC) in Ogun State worsened on Friday as the two main factions of the party have inaugurated factional ward executives across the 236 wards in the state.

A faction led by the state governor, Prince Dapo Abiodun, had on Thursday evening inaugurated its ward executives, while the faction led by a former governor of the state, Sen. Ibikunle Amosun, took their oath of office on Friday morning, in Abeokuta.

Abiodun and Amosun have been at logger heads over the party’s structure, with the two factions conducting parallel ward congresses on Saturday, July 31.

Two sitting Senators, Lekan Mustapha (Ogun East) and Tolu Odebiyi (Ogun West) loyal to Amosun had filed petitions against the outcome of the ward congress before the five-man Appeal Panel set up by the national body of the party to resolve all issues surrounding the congress.

However, the All Progressives Congress (APC) Caretaker/Extraordinary Convention Planning Committee (CECPC) reportedly ratified and adopted the results of the congress conducted by Abiodun’s faction.

This, it was learnt, paved the way for inauguration of factional ward executives by both factions.

On Thursday, the ward chairmen of Abiodun’s faction took their oath of office at the Mitros Hall, Abeokuta, which was administered on them by the party’s lawyer,  Hon. Abeeb  Ajayi.

Addressing them after the inauguration,  the APC Caretaker Committee Chairman in Ogun State,  Yemi Sanusi, urged them to  run an inclusive administration at their respective wards.

Sanusi said the door of the party is wide and open to receive as many people as desirous of joining the progressives train, adding that unity and  peace should be pursued at all times to ensure that the party continue to succeed.

He also charged them to shun pride, divisive tendencies and one man show, saying such attitude breeds only disagreement and faction which would not be tolerated.

Less than 24 hours after the inauguration of Abiodun-backed ward executives, Amosun’s loyalists stormed his constituency office located at Leme, Abeokuta, on Friday morning and inaugurated the faction’s ward executives.

Addressing the gathering, Odebiyi who was Amosun’s Chief of Staff, said: “I don’t have much to say. Let’s continue to do the right thing and very soon, our wishes and aspirations would come to pass.”

On his part, Adebiyi described Amosun-backed ward executives as the “authentic one.”

“We have submitted our results and they have approved of it,” he said.