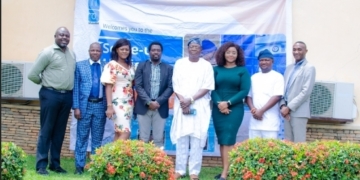 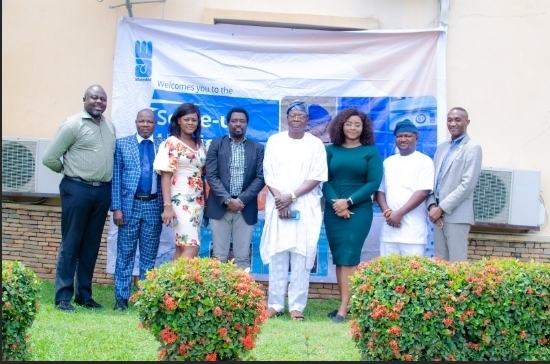 Speaking with journalists  after official launch of the project, the Executive Chiarman, Oyo State Rural Water and Sanitation Agency (RUWASSA), Engr. Najeem Omirinde, commended HAF and Wateraid Nigeria for their support and commitment to good health in the country, especially  Oyo State.

Omirinde noted that HAF has been assisting the state government through their Corporate Social Responsibilty (CSR) in ensuring that people keep to hygienic living, stressing that Oyo State was lucky to be among beneficiaries of the programme out of the 36 states of the federation.

“Oyo is among six states selected for this project, they went for second face, we were still lucky because we have a governor that is up and doing. This third phase of the project is to ensure sustainability of the phase l and phase ll; if there is anything we have not completed, we want to complete it, if we have completed it we want to sustain it.

“I’m saying this here now that the only drug we have for Covid-19 pandemic is simple hygiene, which is washing your hands.At  the time of crisis, they gave us the moveable hand washing machines, which were sent to every schools. They also gave us permanent ones which we distributed to our various palaces across the state like Olubadan’s palace, Alaafin’s palace in Oyo, Soun of Ogbomoso’s palace and we sent to Broadcasting Corporation of Oyo State (BCOS), and other notable broadcasting houses, as well as other public places. So, we are very grateful to them for supporting us with all these machines most especially at a time that our people needed them most, they came at the right time of need and that is the first phase of the project and which is really laudable.”

He continued: “At the second phase, they gave us all the policies that we need before we can have international donor on issue of Water Sanitation and Hygiene (WASH). There was a time the Federal Ministry of Water Resources sent a letter to us that they will give us a sanitation grant and in the requirement we need ODF which we just launched recently, we need WASH policy which WaterAid supported us on this, but we are still on it, so this phase lll of scale up hygiene is like completing what we have in phase ll and at the same time sustain what we have in phase l, so we are having benefits as Oyo State is concerned.

“We have the support of UNICEF; UNICEF left Oyo State seven years ago, but when this Seyi Makinde- led administration came on board and they saw that we are very transparent and accountable, and they saw in us that we are people’s government, they now came and supported in two local governments, which are Ona Ara and Egbeda.  They did this on baseline data, they realised we have to renovate some certain boreholes in these selected areas and now we have 10 hand pump boreholes renovated and 12 renovated solar powered borehole. The project is ongoing and I can assure you in the next two weeks, everything will be completed. But I urge all the residents to manage those facilities well, because all those facilities are their own. They should protect it and maintain it for their own good.”

In his remarks, the Corporate Affairs Manager (West),  Nigerian Breweries, Mr. Danjuma John Ekele, said: “This is the third part of the hand wash in our foundation, which is the Heineken Africa Foundation, and we have been doing this exercise since the height of the Covid-19.  Phase l and phase ll and today we’ve just launched the phase lll to compliment what we have started in the last two years.

“We have done over 270 placement of hand wash point in the state and we have touched all the 33 local government areas of the state with this hand wash. Beyond those numbers, we have been able to affect hundreds of indigenes; I’m talking of families involving the children, especially during the Covid-19 pandemic that really affected the economy of the state. When other states were on the lock down, Oyo was doing well, everybody were going about their lawful businesses because they adopted the use of hygiene.

“We did not achieve this alone, but by networking with other government agencies and partners who helped to sensitise the citizens on the need for them to be hygienic. So, we have a high level of awareness when it comes to the basic and the core of hand washing. Washing our hands was key in combating the Covid-19 virus.

“For us in Nigeria,  we’ve been here for decades, next year will be 40 years of operations in Ibadan. Being here as  citizens of the state, HAF has been supporting in health and water provision across various part of the country. When I was in the North, we did the same by assisting in area of provison of health facilities through our foundation, but here as Nigerian Breweries, there are lots of things we do under our Corporate Social  Responsibility,” Ekele said.

Earlier,  the Project Manager for WaterAid, Mrs Idowu Adebayo, said in response to outbreak of  Covid-19 pandemic in 2020, WaterAid received funding to commence  implementation of  a large-scale hygiene behaviour change project in six states, namely Bauchi, Benue, Ekiti, Enugu, Kaduna and Oyo, under the first phase of the scale up hygiene project and the second phase in Bauchi, Enugu and Oyo.

She noted that with support of other partners and stakeholders, WaterAid has achieved key milestones that realised the project’s objectives, stressing that the project in both phases empowered 26 million people with context-specific hygiene behaviour change promotion packages of tools and insights that were designed to help them protect themselves from Covid-19.

“We have installed 270 non-contact and inclusive hand washing facilities in health centers, schools and public places. Hygiene packs were distributed to marginalised communities to help curb the spread of the disease. Oyo State Government has complemented the project’s efforts by tying up a WASH unit in all the local government areas of the state. We commend this remarkable step of the state government in prioritising water, sanitation and hygeine.

“We are delighted to continue this journey and partnership as we embark on the third phase of the project in Oyo State to curb the spread of Covid-19 and other infectious diseases that continue to pose a huge threat to the public and  economy, exacerbating poverty, poor quality healthcare service and deepening already existing inequalities,” Adebayo said.

Speaking,  the Country Lead for Living Word Mission (LIWOM), Marcus Williams, said: ” I am optimistic that this project would be consolidated under this HAF III implementing year. Gains from HAF I & II would be leveraged on for sustainability and the entire citizens of Oyo State would enjoy it.”

The event was witnessed by top government functionaries, water and sanitation stakeholders, partners, officials from the state primary health care board, officials from  OYORUWASSA, representative of Ibadan South West Local Government among others.