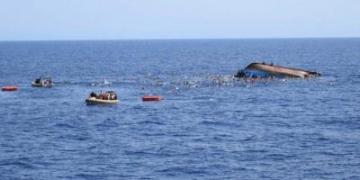 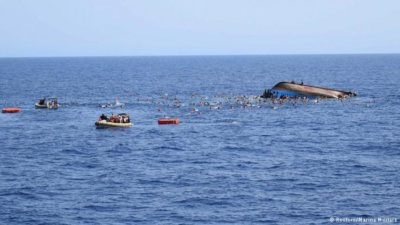 While the world is still outraged over the killing of more than 50 Africans in an airstrike on the Toujurah migrant detention camp in Tripoli, Libya, no fewer than 80 more have drowned in a boat accident that occured on Wednesday.

A report by the UN migration agency said the boat capsized off the coast of the port town of Zarzis, Tunisia. It said four people were rescued while 81 remain missing with dozens confirmed drowned. The few survivors were rescued, more than 14 kilometres off Zarzis.

The International Organization for Migration (IOM), according to the Guardian (UK) said that fishermen pulled four men from the sinking boat, and one of the four later died in hospital. The survivors informed coastguards they set out from Libya and that dozens had drowned.

Flavio Di Giacomo, a spokesman for the IOM, tweeted: “More updates are needed in order to confirm what happened and the actual number of missing.”

At least 65 people heading for Europe from Libya drowned last May when their boat capsized off Tunisia.

Meanwhile, Nigeria’s Ministry of Foreign Affairs has strongly condemned the air strike on the migrant detention centre in Tripoli, Libya.

Mr Friday Akpan, the acting spokesperson of the ministry, in a statement on Thursday in Abuja, described the attack as unwarranted, inhuman and without regard to human lives, adding that 80 others people were injured.

He said that Nigerian Mission officials had visited the centre and preliminary findings confirmed that nine Nigerian men lost their lives in the attack.

Akpan said that the mission has identified and taken custody of three women, one man, a toddler and a 10-year-old boy.

The ministry’s spokesperson said the mission has also requested for the full list and particulars of the migrants in the affected camp.