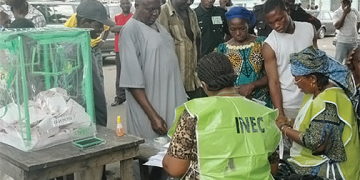 Bauchi inconclusive election: How number of cancelled votes in LGA was inflated from 2,503 to 25,330, INEC reveals, appoints new collation officer

Bauchi inconclusive election: How number of cancelled votes in LGA was inflated from 2,503 to 25,330, INEC reveals, appoints new collation officer

The Independent National Electoral Commission on Saturday ordered the resumption of the collation of results of the Tafawa Balewa Local Government Area of Bauchi State which had been declared inconclusive in the governorship election held on March 9.

This is just as it revealed that the figure of cancelled votes in Ningi LGA was errorneously recorded as 25,330 instead of 2,503.

INEC says it has directed that the error be reversed, a development that would put a question mark on the “inconclusive declaration” given to the outcome of the polls in the state.

The electoral body has also approved the appointment of a new Collation/Returning Officer for Tafawa Balewa LGA to continue and conclude the collation process.

The new RO would replace the Head of Department of Estate Management at Federal Polytechnic, Bauchi, Mrs Dominion Anosike, who withdrew from the exercise over alleged threats to her life and that of her family members.

The Commission disclosed this in a statement issued on Saturday morning by the National Commissioner and Chairman, Information and Voter Education Committee, Festus Okoye.