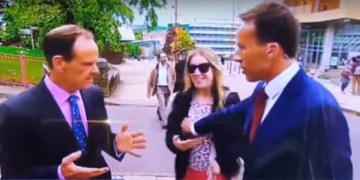 A BBC News reporter, Ben Brown, was slapped on live television after he touched a woman’s breast to move her away from the shot.

Brown was interviewing the channel’s assistant political editor Norman Smith when a woman walked up to them, and while looking into the camera said, “absolutely fantastic” with a thumbs up.

In an attempt to push her off, Brown ‘unintentionally’ touched her breast.

The woman slapped his arm and walked away.

Brown later clarified his position! tweeting:  after the incident, Brown took to Twitter to clarify his position.