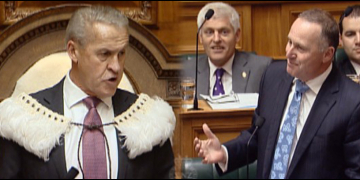 The Speaker of New Zealand’s parliament, David Carter, on Wednesday threw the Prime Minister, John Key, out of the House for disobedience.

The incident happened this morning, when the prime minister was answering a question from Greens co-leader James Shaw on why he refused to apologise to charities Greenpeace, the Red Cross, and Amnesty for linking them to the Panama Papers.

Key continued to address the chamber when the Speaker – who moderates parliamentary debates – stood to his feet.

He told Key to resume his seat and repeatedly called for order before ordering him to leave the debating chamber.

Carter said Key had been given fair warning after a similar incident occurred the previous day.

“I gave him fair warning, when I stand to my feet and call to order, he is to be treated no different to any other member of this House.”

“Obviously I just didn’t see him, didn’t hear him, I was in the middle of an answer,” Key was quoted as saying after leaving the chamber. It was the first time he had ever been ordered out of a debate as premier.