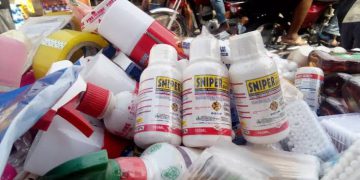 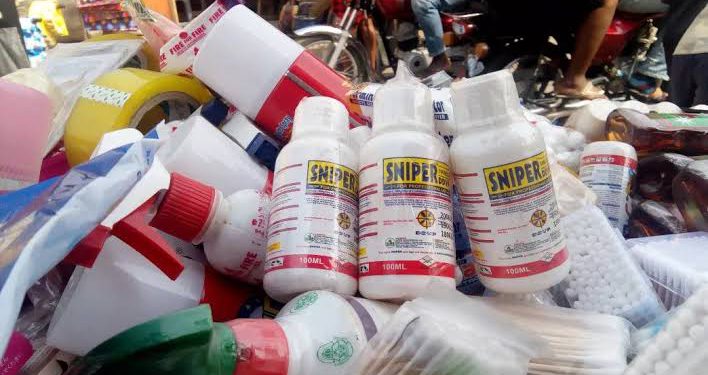 Like many other Nigerians, agro-chemical dealers have been reacting to the new regulations placed on the manufacturing and sale of agro-chemicals including the popular insecticide, Sniper, in Nigeria.

Recall that recently, the National Agency for Food and Drugs Administration and Control (NAFDAC) announced that it had directed agro-dealers to stop the sale of the product in open markets and supermakets.

Dr. Bukar Usman, NAFDAC Director, Veterinary Medicine and Allied Products, made the disclosure at the premises of the International Institute of Tropical Agriculture (IITA), Ibadan, during the launch of a new herbicide for cassava farmers, Lifeline, by UPL, Sprinfield Agro and IITA.

His words: “Recently, some suicide cases have been associated with people drinking Sniper. Henceforth, we are calling on the agro-chemical industry to enhance their distribution channels so that this product (Sniper) gets to only accredited distributors and marketers. We have also placed a ban on the manufacture of smaller packs of Sniper which are easily purchased for household use”.

According to him, Sniper (which contains Dichlorvos or 2,2-dichlorovinyl dimethyl phosphate) is an agro-cultural product meant to be used only in the farms and not in homes. He urged manufacturers and dealers to coperate with NAFDAC to mop up the 100ml bottle of the product which are cheap and easily acquired for household use.

Before the new regulations, the sale of Sniper was on the rise because of its efficacy in the control of household insects like mosquitoes, cockroaches, spiders, bugs, weevils and several others. But it however became deadly following its increasing abuse and use for suicides.

Considering the fact that the new law will cut off a major sales avenue for the product, Newspeakonline talked to some agro-dealers, to feel their pulse. Several Nigerians including doctors have also reacted to the development.

In the views of Mr Francis Chukwu, Director of Franco Agro Chemicals & Co, how a Sniper dealer reacts to the new law will depend on what come first for him or her between the sanctity of life and quest for money.

He said his only regret is that the essence of making the 100ml size for farmers who cannot afford bigger bottles will be affected.

“It’s unfortunate that people started abusing Sniper because it is actually meant to be an agricultural input,” he said. “The reason for making the 100ml size is to help small farmers who cannot afford the one litre or 500ml. But what NAFDAC is doing is not bad at all. It is for the good of Nigeria. No matter how we feel, the health of the society is more important. If they decide to stop the sale of the 100 ml, no problem, but it was only meant to help small farmers.

Mrs Ogochukwu Okoli, president of West Agri Input Dealers Association (WAIDA) posited that NAFDAC’s directive was in order in the face of the current wave of abuse.

“The order is okay. People are abusing a lot of these products. Apart from the suicide issue, some people are even spraying it directly on grains and other foodstuffs. DDVP is a contact poison. It is very strong but that strength is for the farm and not for homes.” she said.

According to her, WAIDA, in its usually manner, has already gone ahead to educate both farmers and dealers on the harmful effect of some agrochemicals, the abuse of some products like Sniper as well as the proper use of approved agrochemicals.

Okoli, who is also the MD/CEO of TOCNOC, an agricultural services firm, added that while agro-dealers in the country were committed to ensuring that farmers get the best benefit on their farms, they would keep cooperating with NAFDAC in ensuring that only safe and environmentally friendly agro-products were promoted.

Another agro-products dealer who chose to spoke on condition of anonymity, stated that he does not think the new control on Sniper will stop the cases of suicide. He however stated that it will reduce incidents of abuse by those using it to control insects at home and weevils in grains.

“Let’s be clear. Sniper is not the cause of suicide. Government should look at the root causes. But that is not to say that NAFDAC has done the wrong thing. The new directive will reduce access to such a strong chemical. Some people use it for the wrong purposes. Sometimes, people, while spraying it at home, mistakenly spray it on food materials that will be consumed. You can imagine the effect” he said.

Popular singer, Douglas Agu a.k.a Runtown, also started a social media conversation about the new regulation, saying that it was “like going to dry the Lagos Lagoon because people use it as a tool for committing suicide”.

“It’s like going to dry up the Lagos Lagoon because people use it as a tool for committing suicide. To truly curb this epidemic, we must focus on the reason WHY people do it.”

His words: “I support a ban on Sniper. The move will not stop suicides but it will reduce d rate of suicide. I know that majority of suicides is caused by clinical depression and anxiety disorders &that tackling mental health issues will go a long way to reduce suicide rates. That said, take a look at Valium (diazepam). Years ago, it was easy to walk into any drug store &buy Valium. However, when it was realised that many persons were using it to commit suicide, the Govt intervened &ensured that no one can buy it without a valid doctor’s prescription.

Nowadays, how many persons commit suicide with Valium? Not many. The logic can apply to Sniper. It’s a fact that easy access to lethal items increases d rate of completed suicides. In the US, guns are easily accessible &so many resort to guns to committing suicide. The more lethal the method used, the higher the chances that the person will die from a suicide.

Many more persons attempt suicide than those who die from it. One of things that contribute to that is the lethality of d method used. There are those who attempted suicide in the past and when they survived they were helped by mental health professionals &well-meaning individuals. They had a second chance because they did not die. Sniper is highly lethal & the chances of survival is slim. It’s cheap &readily available. It is a “loaded weapon” out in d open.

Below are other reactions to the ban: