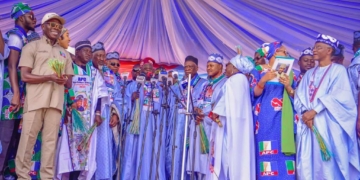 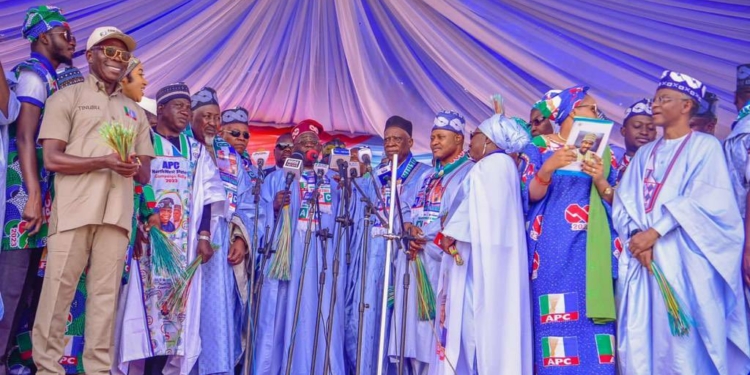 He made the declaration at the party’s North West Presidential Campaign rally in Kaduna, on Tuesday.

“Let me introduce our next president, that’s President Buhari’s successor, to you, Bola Ahmed Tinubu. By February 25, 2023, you should all come out en masse to vote for Tinubu and all candidates of APC,” he said.

Adamu said the flood of human beings that attended the rally showed the popularity of the party.

He further thanked party supporters from Zamfara, Katsina, Kano, Jigawa, Sokoto and Kaduna for coming out in huge numbers to attend the rally.

In his remarks, Kaduna State Governor, Nasir El-Rufai, said the APC had set the standard with the large crowd as he thanked all those that came out to grace the occasion, particularly women and youths.

Earlier on Monday, Tinubu had vowed to end banditry and killings if elected president.

He said this when he paid a courtesy visit to the Emir of Birnin Gwari, Alhaji Jibril Mai Gwari.

He equally promised to construct industrial dams for the people to ease their water problem, saying although it is difficult, he will do his best to make Nigeria a better place.

He donated N50 million to the victims of banditry in the local government area.

“We will give you peace, for those who have been victims of security problem. May Allah grant those who passed Aljannah firdaus.

”I stand before you because there is a good opportunity coming, the election is nearer; I don’t know whether bandits know that or not, but we will serve them notice again. We will not relent in our effort to eliminate banditry and killings in Nigeria. I assure you it will be our priority,” he said.