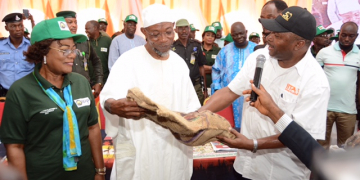 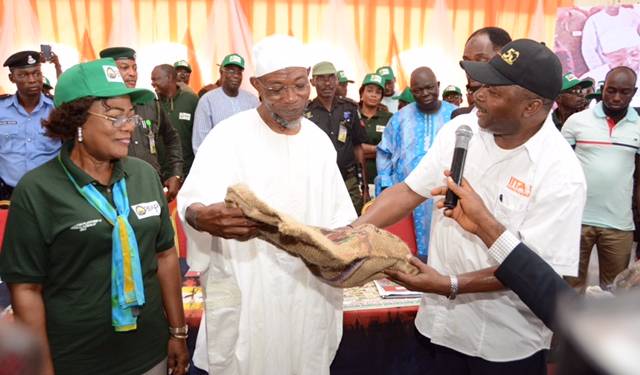 As the International Institute of Tropical Agriculture (IITA) marks its 50th anniversary, the Institute on Thursday inaugurated a new research station in Ago-Owu in Osun state, Nigeria, as part of efforts to expand its research agenda and create impact at farm level.

The Ago Owu research station is located in Ayedade Local Government Area, Osun state, and will primarily serve as a research and training facility that will backstop the state’s agricultural programs and offer training support to the youth in the area in particular and Nigeria in general.

In 2015, Governor Rauf Aregbesola donated a piece of land measuring about 205.5 hectares to IITA as he sought to bring research closer to the people of the state with a view to creating transformational change in the agricultural sector of the state. IITA accepted the offer with the signing of a memorandum of understanding and began investment on the land with the development of roads and other infrastructure.

Governor Aregbesola said he was glad the MoU with IITA moved beyond paper to implementation. He commended IITA for its research efforts in the last 50 years, adding that the research facility will advance research in Osun state with a spinoff effect on other parts of the country.

“We believe that this research facility will train and empower our youth in modern agriculture,” he said.

The inauguration of the research facility also allowed researchers to make presentations on new findings from cassava weed management, breeding, banana breeding and multiplication, cassava processing, and aflasafe—a technology for controlling aflatoxins among others. There was a presentation of improved seeds of maize, cowpea, soybean, yam, plantain seedlings, and cassava stems for onward distribution to farmers in Osun state. IITA also gave the governor some quantities of Purdue Improved Crop Storage (PICS) bags which provide simple, low-cost method of reducing post-harvest cowpea losses due to insects’ infestations.

The Director General, IITA, Dr Nteranya Sanginga said, IITA was happy to work with and in Osun state.

“This research facility is part of our strategy to take research closer to the people. Our plan is to make this station a one-stop shop where farmers’ needs will be addressed,” he said.

Under the refreshed IITA strategy, IITA plans to lift 11 million people out of poverty in sub-Saharan Africa by 2020 and to reclaim 7.5 million hectares of degraded land and put the land into sustainable use. Achieving this goal entails IITA expanding its partnership scope and strengthening old partnerships.

Dr Sanginga said the Ago-Owu research facility would primarily conduct research on cassava, maize, yam, soybean, banana/plantain and cowpea. “We will also be using the facility to train Nigerian youths in agribusiness,” he added.

The inauguration of Ago-Owo research station brings to six the number of such facilities in Nigeria. Others are located in Onne (Rivers State), Abuja, Mokwa (Niger state), Minjibir (Kano), and Ikene (Ogun State).

Dr Alfred Dixon, Director for Development and Delivery, IITA, said the inauguration of the research facility was a step in the right direction with the potential of bringing many benefits to the people of the state in particular, and the country in general.

He said the research facility would assist the state in accelerating its agricultural reform agenda whose particular focus is on increasing agricultural productivity and job creation.