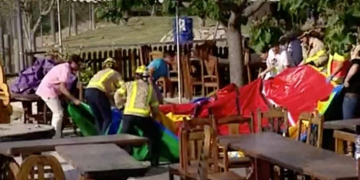 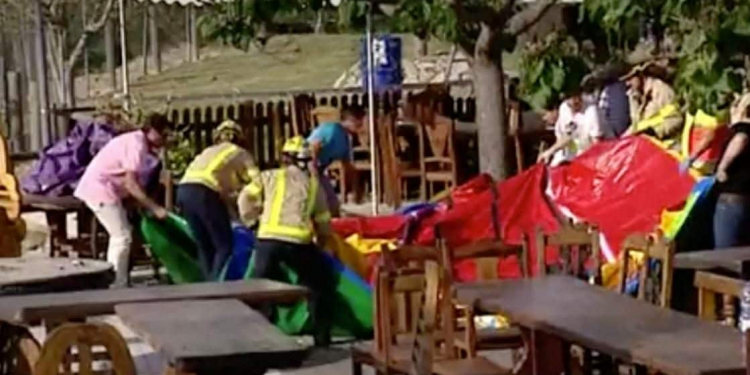 Seven other children were injured, two seriously, during the incident in near Catalonia’s Costa Brava coast CREDIT: WWW.ANTENA3.COM

Spanish police are investigating after a six-year-old girl died when the bouncy castle she was playing on outside a restaurant in northeast Spain flew into the air.

Seven other children were injured, two seriously, during the incident in Caldes de Malavella, near Catalonia’s Costa Brava coast.

According to witnesses, the newly installed inflatable play area landed around 40 metres from its original position outside the Mas Oller restaurant.

Reports in local media said police believe the bouncy castle had been secured at just two of its six anchor points.

Some restaurant goers reported hearing a loud noise like an explosion just before the bouncy castle took to the air. No arrests have been made.

The owner of Mas Oller, Jaume Matas, told reporters that he had only installed the attraction on March 14, and that he had no idea why the accident had taken place. “Perhaps it was a gust of wind,” he said.

Children were sent flying off the bouncy castle, according to the local mayor, Salvador Balliu, who told Catalunya Radio that the restaurant had not applied for the necessary license when installing the attraction.

The six-year-old girl was taken by helicopter to Barcelona’s Vall d’Hebron hospital, where she arrived in a critical state.

A nine-year-old boy remains in intensive care with multiple injuries, and a girl of seven also spent the night in hospital. Five children aged between two and 11 were treated for minor injuries in a nearby Girona hospital.

Catalonia’s president, Carles Puigdemont, tweeted a message of condolence to the family of the dead girl. “All my condolences to the family in this tragedy. All my solidarity and affection in these moments of such pain. Rest in peace.”