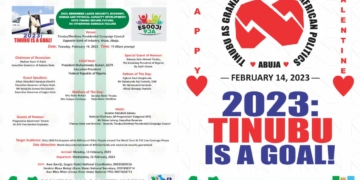 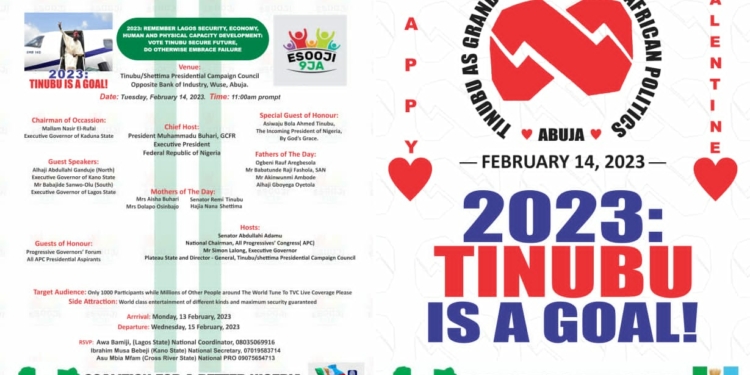 The umbrella body of hundreds of youth and students’ organisations within and outside Nigeria, Coalition for a Better Nigeria, will hold the third edition of its national discourse on Tuesday, February 14, 2023, in Abuja.

A statement issued on Tuesday by the National Coordinator, Coalition for Better Nigeria, Comrade Awa Bamiji, said the event will take place at the All Progressives Congress Presidential Campaign Council (APC PCC) headquarters, opposite Bank of Industry, Wuse, Abuja, by 11am.

“Asiwaju Bola Ahmed Tinubu is the Special Guest of Honour while Guests of Honour are all members of the Progressive Governors’ Forum and all APC presidential aspirants.
“Fathers of the day are all the former governors and close lieutenants of Asiwaju Bola Ahmed Tinubu, including Ogbeni Rauf Aregbesola, Mr Babatunde Raji Fashola (SAN), Mr Akinwunmi Ambode and Alhaji Gboyega Oyetola. Mothers of the day are Dr (Mrs) Aisha Buhari, wife of the president; Mrs Dolapo Osinbajo, wife of the vice president, Prof Yemi Osinbajo; Senator Remi Tinubu, and Hajia Nana Shettima, wife of the APC vice presidential candidate, Senator Kashim Shettima,” he said.

Awa added that the APC presidential candidate, Tinubu, would be awarded as the Grand Commander of African Politics  and also unveiled as life patron of civil society communities in Africa.

He further stated that the occasion would be used to celebrate the 30 years anniversary of the annulment of  the June 12,1993, presidential election.

Awa noted that only 1000  people would be allowed at the venue, adding that other people across the globe can watch the programme live on  TVC.