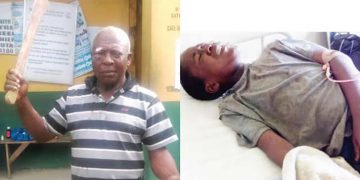 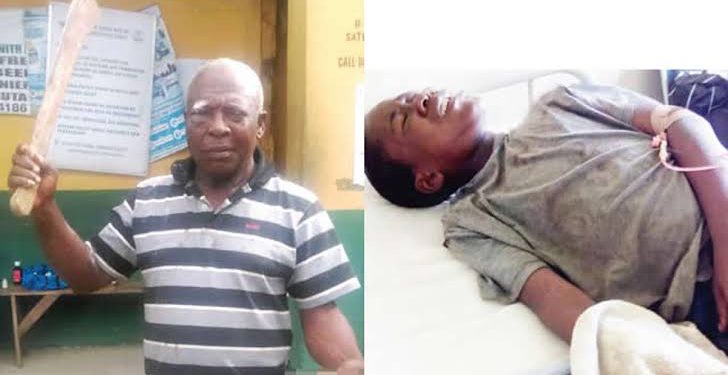 By Vincent Kalu and Chioma Igbokwe of The Sun

The 67-year-old fish farmer, Jeremiah Obrifor who was accused of cutting off the wrist of an 11-year-old boy in Lagos has sworn that his intention was to save his fish and not to harm the kid identified as Goodluck Amechi.

On June 7, 2019, some children including Goodluck were alleged to have attempted to steal fish from his pond located at No 14 Isha Ibrahim Street, Mechanic Bus stop, Mebamu, Okokomaiko area of the state. Enraged by their audacity, Obrifor was alleged to have cut off the wrist of Goodluck while he was about to take one of the fishes from the pond. It took the timely intervention of policemen attached to Okokomaiko police division to save him from being lynched by angry residents who invaded his house after the incident.

Lagos State Police Command spokesman, Elkana Bala, a Deputy Superintendent of Police, said that anti-riot policemen were immediately deployed to forestall possible breakdown of law and order. “Later that day, one Doris Isaac who lives at No. 6 Ajanaku Street, Okoko reported that his foster son, Goodluck Amechi was attacked by Obrifor and he cut off his right hand. The suspect alleged that, he saw the victim around his fishpond and thought that he came to steal his fish and that is why he attacked him. Investigation is ongoing and the suspect will be charged to court at the end of investigation”, the police spokesman added.

At the police station, Obrifor lamented that he is yet to believe that after 47 years of hardwork, he would end up in prison fighting for his life.

“I came to Lagos 47 years ago when one of my uncles invited me to stay in his house. I quickly learnt how to become an electrician and secured a job with a printing company in Apapa. It was there that I worked, saved money to marry and by the grace of God, I am blessed with four children, three girls and a boy. Fifteen years ago, with the money I saved, I was able to buy my own land and built a house at No. 14 Isah Ibrahim Street in Okokomaiko.

“I also constructed a fishpond and started rearing different types of fish. With time, I concentrated on catfish and another fish known as water snapper. I was making about N600, 000 from sales every four months. Early last year, they started stealing the fish. Initially, I thought that the drop in the number of fish was because they ate each other or died. I did not notice till one day I saw a dead fish on the ground. I discovered that there is a hole on the wall because the wall of the pond is part of the fence. I traced it to the other fence and saw different types of hook that they were using to steal my fish.

“All I did was to block the hole and became more attentive especially when the fish is ready to be harvested. Most of the times, their parents will return the fish when they catch them but the others will happily help them cook the fish and naturally those children will be encouraged to continue,” he narrated.

Obrifor said that he discovered that they normally come every Saturday to pick fish that their family will use to cook rice and stew on Sunday. “I was managing the loss, till sometime in June when I realized the extent of the theft. On June 1, there was a heavy rainfall, and if that happens, the level of water in the pond will rise. And if not controlled will overflow and fish will be washed away. Luckily it was not flooded and while I was inspecting the pond, I saw one of the fishes fly across the fence and disappeared. I was still trying to understand what happened when another one flew across again. It was then I noticed about three fishing hooks come from a very big hole on the wall. I shouted and they ran away.

‘That very day, we had a kindred meeting in my compound, so I had to go and face that hoping that I have scared them enough. My plan was to block the hole the next day. The next day being June 2nd, I went to check and noticed the same development. I complained bitterly to my neighbours and they advised me to use old roofing sheet to construct a temporary roof over the pond.”

According to Obrifor, the boys stopped coming through their regular source but decided to construct a much bigger hole. “Unfortunately on June 7, a Friday, they came again. I had received a call from my daughter who is in school that she needed money to buy books. I left for the bank and sent what I I could afford to her. When I came back, I decided to go and check my fish and the boys were there again.

“I was so angry and picked my machete and raced towards the pond. My intention was to cut the wires and destroy their tools. As soon as I got there, I saw a fish being lifted off the pond and I struck, unfortunately instead of cutting the wire, the blade of my machete cut off the hand of the boy from the wrist. They all ran away including the boy, it was when I looked at my machete and saw blood that I realized what happened.”

Begging for mercy, Obrifor insists that it was not his intention to harm the boy. “I cannot believe that after 67 years of my life that I will end up in police station for attempted murder. I have four children and cannot be heartless to hurt another child. The much I will do is to flog them as a way to discipline the children.

It was at the police station that I knew they were seven of them and they have been stealing from me for months.”

When asked why he did not report to the police, Obrifor said that he felt it would be a wasted effort. “If I report the matter to the police, I do not know their faces or who their parents are. I will end up wasting money. I thought if I scare them a little, they would stop. I am a peace-loving man; you can ask my wife, children or even my neighbours. I have never being involved in a police case no matter the type. I can’t believe that I am in such a mess.

“I believe that I have hope because I should have dead by now. Immediately after the incident, a lot of people rushed into the compound and started beating me. They destroyed my house, vandalized everywhere and poured acid into the pond. What crime did the fish commit that they had to kill them like that. It took the timely intervention of the police to rescue me. May God bless them.”

On possibility of settling the matter out of court, Obrifor said he is sober and has made efforts to reach out to the family. “It is when this incident happened that I heard that his mother died in 2014 and his father sells all these road side hot drinks. I am ready to take care of the medical expenses and also assist him in future. It’s unfortunate that it was his right hand that was affected but God knows that I had no intention to inflict any sort of injury on his body.”

When one of Saturday Sun correspondents visited the scene, the compound was locked up as all members of Obrifor’s family had relocated. From the fence area as alleged by Obrifor, the large hole created by the alleged thieves was still very visible while the fish pond had turned black with no single fish alive.

However neighbours who volunteered to speak described the incident as unfortunate.They describe the suspect as a peace-loving man. Speaking, Richard Enweson said he has been a neighbour to Obrifor for almost ten years, and has never seen him engage in any form of altercation with anybody.

“I see him everyday. Last year when I started rearing snails, I was going to the canal to cut banana leaves and while there, I would also see him attending to his fish in their ponds, and also clearing the area with cutlass. When I heard what happened, I couldn’t believe it because he isn’t violent and he is far from anything that can cause or bring trouble.

“It could be a reflex action from his experience. Not up to a year ago, armed robbers invaded and ransacked his house and two other houses in the neighbourhood, maybe since then he decided to take precaution. A hole was dug on his fence and he saw a hand that stretched to his compound through the hole, instinctively, he thought he has caught a thief; not knowing it was a kid.

“It is not only the boy; there are many of them. Last week I saw them and queried them about their mission there, but they said they came for fishing at the canal. Probably, when they couldn’t catch fish, they realized that there was a fishpond in the compound and decided to help themselves.

I pity the boy in question, I know his father, but if they are allowed to continue to do what they were doing, they would think it was a normal thing not knowing it was a trespass and a crime, and before you know it they will start breaking doors and the society will be on edge. It is painful that the boy has to learn it the hard way, but it is going to serve as deterrent to others, “

On why his house was burnt down since he is known as a gentleman and at peace with the community, Richard insists that the assailants were not from their neighbourhood. “Those people that attacked his house were not from this neighbourhood; they are from another street, Ajakaiye. It happened in the morning, and when I came out they said he cut off somebody’s hand. I said it was not possible because those who know him knew he couldn’t hurt a fly. On our part, because we are not young, we couldn’t stop the mob action, it was Chief Odunsi and one Alhaji that prevailed on them from further destroying the house. He is somebody I admire a lot because of his easy-going life and relationship with people “Also speaking, Chief Odunsi, said that he “can’t explain what happened, but I came outside and saw a motley crowd in front of the man’s house and what I did was to persuade and discourage them from setting the house ablaze, and they obeyed as they didn’t go further than they had gone before my arrival there.”