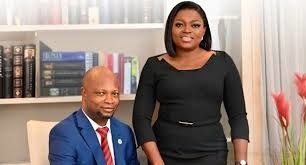 The PDP governorship candidate, Olajide Adediran, popularly known as Jandor, disclosed this in an interview with NAN, on Wednesday.

He said the incident happened on Tuesday, adding that their campaign was cut short following the incident.

During a meeting with the Chief Imam of Ketu Central Mosque, Jandor confirmed that a security team member was stabbed while others, including journalists, were injured.

He, however, confirmed that the actress left the campaign train while the team continued to move around the streets in the local government.

Jandor had in October 2022 cried out over similar situation that had happened repeatedly in various local government areas since he kicked off his tour of the 245 wards in the state.

Also, the PDP spokesperson in the state, Hakeem Amode, alleged that the local government chairperson sent the hoodlums to disrupt their campaign.

In a statement, Amode said: “Usually when we go to the market, Funke Akindele goes to the market to speak with the market women, and we know it is our right to be able to talk freely,campaign to anybody.”

He alleged that the Ikosi LCDA chairperson, Abolanle Bada, brought thugs to intimidate them on Tuesday, adding that he had videos of the incident.

“The local government chairperson came into the market, used her car to block and brought a bunch of thugs to attack us in Kosofe Local Government, which is very, very sad; it is unbelievable we are not allowed to speak to people freely.

“Under the new electoral act, we are free to campaign anywhere; this is Lagos, where we should be able to talk to everybody without intimidation or discrimination. That should not even happen,” he added.

He also claimed that this was not the first time incidents like this will be happening, adding that the intimidation has escalated past the point of harassment during the market campaigns.

“Those we gave our campaign materials to, they have gone to evict them from their house and ask them not to come to the market; they came crying to our campaign offices. These are market women that paid for the stalls they are using in the market.

“Why should we come to this level of harassment and intimidation of our members? Even market women,” he said.

Amode claimed that the team had no choice but to retreat and join Jandor where he was campaigning, so the situation would not escalate.

Meanwhile, the spokesperson for the All Progressive Congress (APC) in Lagos State, Seye Oladejo, denied the allegations.

He said: “The PDP people are well known for their wild allegations; if people were attacked, I think it is what the security agencies would be interested in; I don’t think the solution is to take it to the media.

“As far as we are concerned, we are not in the business of violence; our party is going for victory, so why should we be distracted by people who cannot even put their house in order and want to come into government.

Oladejo claimed that APC is not under any pressure for the election and advised any party claiming to be attacked to take the matter to the security agencies.

Akindele, popularly known as Jenifa, was officially unveiled as Jandor’s running in July 2022.