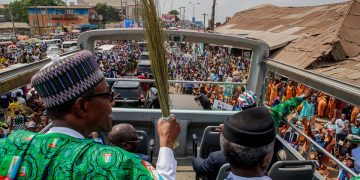 Go back to farming, we’ll support you with infrastructure, Buhari tells Oyo people

Go back to farming, we’ll support you with infrastructure, Buhari tells Oyo people 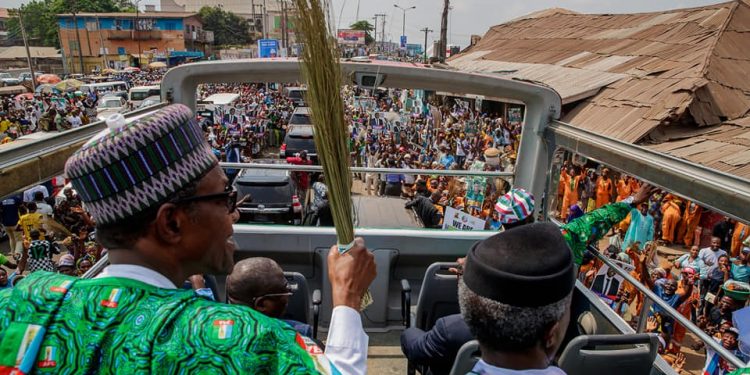 He said this at the APC 2019 presidential campaign rally for his reelection held at Mapo, Ibadan

Addressing the mamoth crowd at the rally, Buhari said: “I am asking your governors to please persuade you to go back to the farm.

“The two previous raining seasons were good and for this coming one, we have make agriculture a priority and in terms of fertilizer and the other inputs, we have maintained the price at a subsidized rate. We have now stopped importation of rice.”

“We are going to build the roads, we are going to do the power but we need your support to make sure we accomplish this” he said.

Vice President Yemi Osinbajo in his speech described President Buhari as an honest person who the contry needs at this time.

A national leader of the party, Asiwaju Bola Tinubu enjoined the people to bemondful of tnose tney vote for, saying: “Don’t let people that will mismanage your resources lie to you. They said we are going to rig, how will people that are many like this rig. They are the ones that do not have people behind them. If they do not understand politics again, they should go and retire. Vote for Buhari and APC.”

Governor Abiola Ajimobi asked the people of the state to repeat the feat of 2015 by voting for President Buhari en masse saying “the last three and a half years, the president has moved the country from low level to the next level.”

In his own remark, the national chairman of APC, Adams Oshiomole said: “On the 16th, we will open our eyes, we will vote for Buhari and vote PDP out. It is not over until it is over, so you come out and vote against privatization of Nigeria. Vote against the auctioning of our assets. Vote against enriching the friends of Atiku. Vote to continue with N-Power programme. Vote to continue the resuscitation of rail and resuscitation of road. When you do that, in another four years, Nigeria will never be the same”.