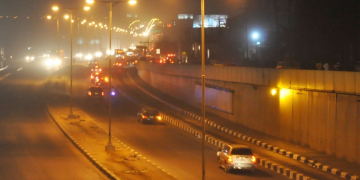 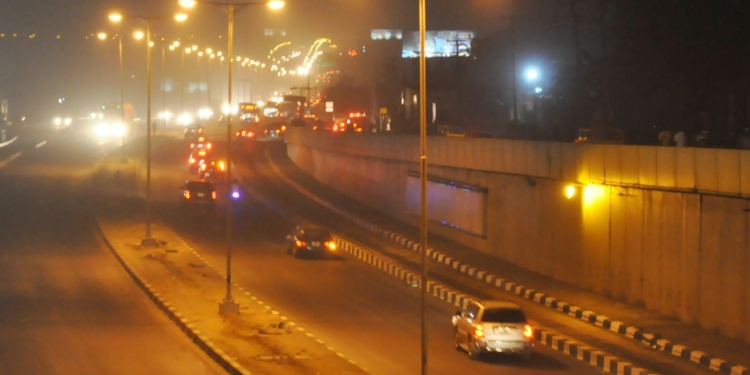 The Surulere Police Division, Lagos State, on Tuesday arrested four men, who were accused of eating late in the night around the Ojuelegba Bridge in the Surulere area.

Punch reports that the suspects – one of them identified as Sango Svengali – were eating noodles at a shop on Ogunlana Drive around 11pm, when the policemen, said to be about eight, rounded them up.

The policemen, who reportedly brought three vans, were said to have accused the men of eating late and queried why they did not eat in their houses. they were then whisked away to the Area C Command, Surulere.

It was learnt that the policemen at the counter allegedly demanded N15,000 ‘settlement’ from the men, threatening that they would sleep in the cell overnight if they failed to settle.

Our correspondent gathered that Svengali and his friends, who were not made to write any statement, offered N5,000 but the policemen refused.

Our correspondent learnt that on Wednesday, the suspects were brought before the area commander, who noted that they resembled Boko Haram members, ordering them to shave their beards.

Speaking with PUNCH Metro on Thursday after regaining his freedom, Svengali said the policemen did not ask any of them for identification before forcing them into their vans.

He said, “I had a stressful day at work on Tuesday. There was a lot of traffic. Instead of going home through the Third Mainland Bridge, I decided to spend the night at a friend’s place in Ojuelegba. Some other friends came to my friend’s place. Later, around 11pm, we were hungry and we decided to go down the road to buy noodles.

“The Mai shai are basically night-food people. So we knew they would still be selling food. We drove to Ogunlana Drive and saw a woman selling noodles by the roadside. The three of us decided to buy noodles and eat. We sat on the trunk of the two cars we brought and ate the food. As we were about to go, three police vans stopped by our vehicles. There were about eight policemen in the vans.

“The policemen dragged me into one of their vans. I was confused and wanted to resist. But when I saw the young man selling recharge cards beside the woman being slapped several times, I knew it was useless resisting. The policemen did not ask us any question. They did not ask us to identify ourselves.”

Svengali added that when they got to the station, they met eight others who had been arrested.

He said, “While in the van, the policemen sitting beside me collected my phone and started searching through it. He checked through my electronic mail, and when he did not find anything, he said, ‘Sometimes you go dey pray say you no dey road when devil dey pass.’ He added that we would ‘sort it out’ at the station.

“As we moved on, I noticed that my other friends – except one – were in the other vans. When we got to the station, we found that eight people had been picked up too. The policemen at the station said, ‘Why una no chop for house?’ One of my friends started negotiating for us at the counter. The policemen said they wanted N15,000 to let three of us go. He was begging them to take N5,000. They refused.

“The cell stank like a gutter. There were about 18 of us  there. We endured the stench till morning. When it was around 7am, we were brought before the area commander. We were lined up like criminals. He said our misdeed was that we ate at an unholy hour. He said we looked like fanatics and Boko Haram members.

“He ordered them to lock us up again. After some time, some of our friends came, one of them is a lawyer. He spoke to the area commander. He said the only way to release us was to shave our beards. The police bought shaving sticks and made us shave at the counter. I was so embarrassed. All this while, we never wrote any statement. We were not accused of anything. When I finally left, it was some minutes before 10am.”

Our correspondent learnt that one of the suspects communicated with the Complaints Response Unit, Abuja, through Twitter, to report the alleged bribe the policemen demanded.
The Lagos State Police Public Relations Officer, SP Dolapo Badmos, had yet to reply to a text message sent to her phone on the incident.

The Head of the CRU, Force Headquarters, Abuja, CSP Abayomi Shogunle, however, replied on Twitter that a team of policemen had gone to the police station to ascertain the claim of the complainants.

He said, “A special monitoring team from the Force Headquarters on nationwide patrol is at the police station in Ojuelegba to verify this report. The complaint is acknowledged and the tracking number is CRU 359117.”