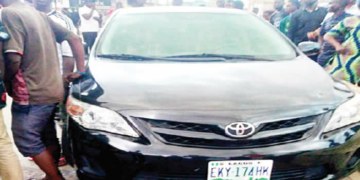 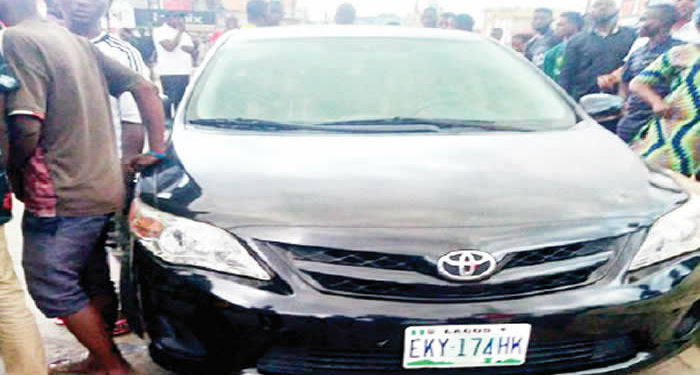 According to eyewitnesses who narrated the incident on Twitter, the man was forced out of a black Toyota Corolla, which he was driving on Medical road.

A user, @girllikehelen, who shared photos of the vehicle, said the incident happened in front of the Slot retail shop around 8am.

“The owner of this car was allegedly kidnapped on Medical Road in Ikeja this morning.  According to my source, the gunmen accosted the owner of the car and asked him to come down from the vehicle; he refused. They pulled out their guns, he refused to alight from the car.

“Then they pulled out a cutlass. He got out of the car and they whisked him away in their vehicle.  The gunmen were six in number and they had masks on,” she wrote.

Her claims was corroborated by another user, @RealMabel99, who said the gunmen used a cutlass on the victim’s leg.

She said: “They later took him, after using a cutlass to cut his leg. I was there. People couldn’t do anything because the men were armed and wore masks. This Lagos is no longer safe. I’m still in shock till now.”

One @NwaoguMarvis, who claimed he usually took the route to work, said he saw a crowd at the scene.

“Nowhere is safe in Nigeria anymore. For this to happen at Medical Road at 8am?” he wrote.

Another eyewitness, @AmaOmenma, said that the crowd gathered around the man’s car, which was left behind after he was taken away by the gunmen.

“Everyone was on the run as they were ready to shoot at anyone in sight. Some threw stones at them though but eventually succeeded in bundling him away,” he added.

He said: “I am aware of the situation. It was as narrated on social media. We have commenced investigation; we have leads. But we are not saying much about it so we don’t jeopardise investigation.”