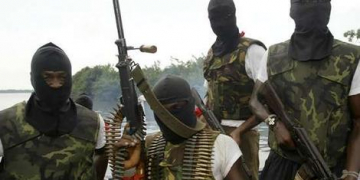 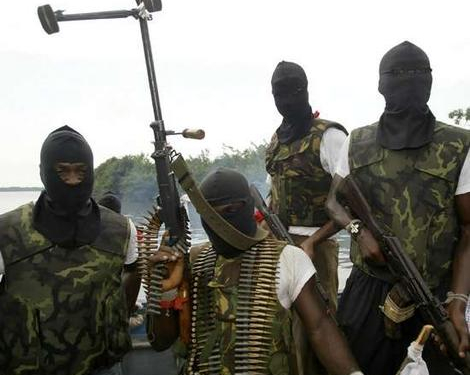 Share on FacebookShare on TwitterShare on WhatsAppShare on Telegram
The navy has confirmed that a group known as the Niger Delta Avengers on Wednesday night blew up an offshore oil facility operated by US oil group Chevron in Escravos, near Warri, Delta State.
Navy Spokesman, Chris Ezekobe told AFP on Friday:

“There was an attack on a Chevron facility near Escravos on Wednesday night. The incident happened about four nautical miles from Escravos, near Warri, in Delta state.

“Militants using explosives blew up the Okan platform, a collection facility for offshore oil and gas that feeds the Escravos terminal”.

Below is a statement released on the website of the militant group, claiming that the failure of ex-militant Chief Government Ekpemupolo a.k.a Tompolo to apologise to them forced them to launch the attack.
They also claim to be fighting for the emancipation Niger Delta.
The statement reads:
To keep to our promise, the three (3) days ultimatum given to Chief Government Ekpemupolo has elapsed and he fail to apologize to the Niger Delta Avengers, at 2200hours Thursday, May 5, 2016, our strike team 4 hit the Nigerian National Petroleum Coperation (NNPC) crude and gas lines

The Crude line feeds the Warri and Kaduna refineries respectively, while the gas line feeds the Lagos and Abuja electricity power supply. With this development the Warri and Kaduna refineries will be shut down and all cities that depends on the gas line for power will all be in total darkness like the creeks of the Niger Delta.

In same vein, the Niger Delta Avengers strike team 7 at same time 2200hours Thursday, May 5, 2016, blew up Well D25 in Abiteye. A major gas Well belonging to Chevron. And also blow up major pipe lines to effectively put the Abiteye, Alero, Dibi, Otunana and Makaraba flow stations that feed the Chevron tank farm out of operation. As at now Chevron operation in the Niger Delta is zero.

Located some 100meters away from the blast Nigerian National Petroleum Coperation (NNPC) pipeline is a Military houseboat stationed there, to protect the oil pipelines. But we want you public to know that despite the heavy present of Military operatives our activities can’t be stop and it just waste of fund and time to let the Nigeria military protect oil installations.

This is a clear warning to the all Niger Delta Politicians, Traditional rulers, Community leaders, and the likes of Tompolo to mind their business and leave the liberation of the Niger delta people to the Avengers. Those who believes taking sides with federal government to fight Niger Deltans is the best option. Avengers are here on ground, neither you nor the federal government can stop us. If you don’t stay clear and let us to carry out our activities we will bring the fight to your individual doorsteps. Our major goal is to cripple the Nigeria economy.

We are using this medium to ask all Niger Deltans to take the war to all oil installations in their various communities because this is your war.

If the International oil companies and federal government of Nigeria thinks the Niger Delta Avengers are criminal as they claim and fails to meet our demands. The Niger Delta Avengers are going to activate its elite unit THE NIGER DELTA AIR FORCE code name strike team 1. The International Oil Companies will be our first target, all oil facilities including their offshore platforms eg Bonga Fpso, EA field and their tank farms such as Bonny tank farm, Escravos tank farm and Forcados tank farm.

Some of you are our brothers avoiding you is not sign of being lazy. If you dare harass our people we are going to face you. Especially, if you harass any community in search of Avengers. We will come after you and its going to be bloody and merciless

We are the Niger Delta avengers you (Nigeria Military) are not going to see us coming but we will get you.