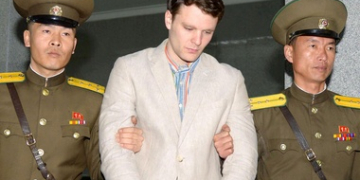 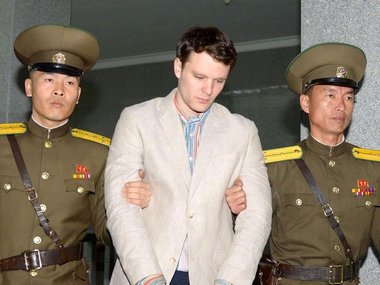 FILE PHOTO - Otto Frederick Warmbier (C), a University of Virginia student who was detained in North Korea since early January, is taken to North Korea's top court in Pyongyang, North Korea, in this photo released by Kyodo March 16, 2016. Mandatory credit REUTERS/Kyodo/File Photo ATTENTION EDITORS - THIS IMAGE HAS BEEN SUPPLIED BY A THIRD PARTY. FOR EDITORIAL USE ONLY. NOT FOR SALE FOR MARKETING OR ADVERTISING CAMPAIGNS. MANDATORY CREDIT. JAPAN OUT. NO COMMERCIAL OR EDITORIAL SALES IN JAPAN TPX IMAGES OF THE DAY - RTS17SBE

An Ohio coroner, abiding by family wishes, has performed an external examination instead of a full autopsy on the body of the US student who was held prisoner in North Korea for 17 months and sent home in a coma, the agency said on Tuesday.

Highlights of the agreements reached by Trump and Kim Jong Un

The Hamilton County Coroner’s Office was still conferring on Tuesday with doctors at a Cincinnati hospital who were treating Otto Warmbier, 22, before reaching any conclusions about his death a day earlier, investigator Daryl Zornes said.

He declined to estimate how long it would take for the coroner’s office to complete its inquiry. Preliminary autopsy findings had been expected later on Tuesday or on Wednesday.

There was no immediate word from the family about why relatives declined an autopsy, which may have shed more light on the cause of the neurological injuries that left him in a coma.

Warmbier’s death came just days after he was released by the North Korean government and returned to the United States suffering from what US doctors described as extensive brain damage.

Warmbier, an Ohio native and student at the University of Virginia, was arrested in North Korea in January 2016 while visiting as a tourist. He was sentenced two months later to 15 years of hard labour for trying to steal an item bearing a propaganda slogan from his hotel in North Korea’s capital, Pyongyang, the nation’s state media said.

The circumstances of his detention and what medical treatment he received in North Korea remain unknown. The United States has demanded North Korea release three other US citizens it holds in detention: missionary Kim Dong Chul and academics Tony Kim and Kim Hak Song.

Warmbier’s death has only heightened US-North Korean tensions aggravated by dozens of North Korean missile launches and two nuclear bomb tests since last year in defiance of UN Security Council resolutions. The North Korean government has vowed to develop a nuclear-tipped intercontinental missile capable of hitting the US mainland.

Warmbier’s family has not specified how he slipped from a comatose state to death, but said in a statement on Monday that the “awful torturous mistreatment” he endured while in captivity meant “no other outcome was possible.”

Relatives have said they were told by U.S. envoys that North Korean officials claimed Warmbier contracted botulism after his trial and lapsed into a coma after taking a sleeping pill. Fred Warmbier, the student’s father, has said he disbelieves this account.

US President Donald Trump said on Tuesday he had spoken with Warmbier’s family and praised them as “incredible.”

“It’s a total disgrace what happened to Otto,” Trump told reporters in the White House, where he was meeting with Ukrainian President Petro Poroshenko. “And frankly, if he were brought home sooner, I think the results would have been a lot different.”

White House press secretary Sean Spicer said the administration would “continue to apply economic and political pressure” on North Korea, in conjunction with US allies and China, “to change this behaviour and this regime.”

Trump said on Twitter on Tuesday he appreciated efforts by Chinese President Xi Jinping “to help with North Korea,” adding “It has not worked out. At least I know China tried!”