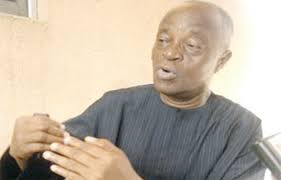 A former Minister of Works and Housing, Adeseye Ogunlewe, has explained why he is backing the rumoured presidential ambition of former Languages State Government, Asiwaju Bola Tinubu.

Ogunlewe, who is a former member of the Peoples Democratic Party(PDP), led a campaign against Tinubu when he was a minister from Lagos State.

But in an Interview with Sunday Punch, the former minister said times have changed.

She asked if he still hold the belief that Tinubu’s real name was Sangodele, he said: “That was my perception at that time but the man has outsmarted everybody. He’s an extremely clever person and you have to study him, either to criticise him or to love him. If you are not discerning and you cannot see facts, you will be having the same thoughts that you had of him ten years ago. Honestly, I am so perplexed about the way he has been able to perform this magic. I didn’t believe it but he has done so. Who in the entire country can install the President, the Vice-President, the Senate President and the Speaker? For eight years? One person! Don’t you think there is something in that person we have to admire? He would determine who was going to be governor of Imo State; Yobe State; Ogun State, Osun State, and he would be correct. He would determine who was going to be ministers and those people would be appointed. He would determine who was going to get appointed as ambassador and such persons would get it. Whether you like him or you hate him, just focus on his person. How has he been able to get to this level? That is what is amazing to me. You see people groping in the dark: he is this, he is that, but the man has moved on. Are you going to sit down with your frustration? The man doesn’t even know that you are frustrated. This man, one single person, installed a presidency in Nigeria. Who has done so before? He is the rallying point for Nigerian politics today and he has the background of political development; he has the knowledge. Hate him or love him.”

Speaking on his decision to join the Wall Progresives Congress( APC), the former minister said:”In Lagos State, there is nothing like PDP. The leadership is corrupt. They would make noise today on the television, tomorrow they are dining with the man. Believe it or not, many politicians and even those that are politically minded know what I’m saying. People have seen it, they have witnessed it that these PDP people make noise that when election comes they will perform magic because they want to get money, but what do we see?”

On what made him recommend Tinubu who he once claimed was not suitable to govern Lagos State to be President in 2023, Ogunlewe said: “His capacity to build human resource; capacity to predict things; capacity to be a lot reasonable in whatever he wants to do and get it. If you know how the presidency under the PDP revered Bola Tinubu, you will not believe it. (Former President Goodluck) Jonathan believed that Tinubu is a magician. Let me give you an instance. In 2011, during the general election, we were about to defeat ACN at that time. Bola Tinubu called Jonathan to cancel the election in Lagos State and he cancelled it at 5 o’clock in the afternoon on the day of the election which we were winning.”