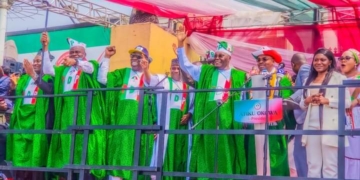 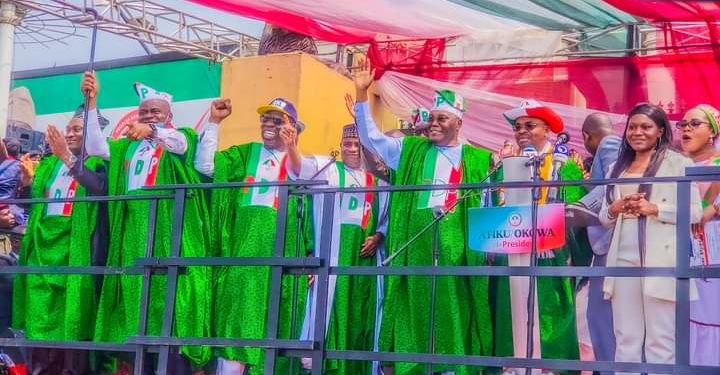 Speaking at the PDP presidential campaigm rally at Mapo Hall, Ibadan, on Thursday, Atiku pointed out that the yearnings of South West people has been restructuring, assuring that his administration would restructure Nigeria. He explained that restructuring was one of his five-point agenda.

“South West has been known to agitate for restructuring. By restructuring we mean giving more power or autonomy and money to the states. It is one of the five pillars of our programmes. This is a commitment. Again, we are committed to ensuring there are no strikes in our universities, meaning that we will fund our universities and pay our teachers on time so that we don’t have any disruptions in our academic activities. South West is also known to be a business centre. That’s why in our economic programme, we are committed to making sure that industrialisation of South West is achieved,” he said.

The former vice president also promised unity and inclusiveness, stressing that every part of the country will be represented in his government.

He pledged to tackle insecurity, adding that the APC administration has failed in all its commitment, hence PDP should be voted at all levels

In his address, vice presidential candidate of the PDP, Dr Ifeanyi Okowa, described his visit to Ibadan as homecoming. having studied and graduated from the University of Ibadan in 1981.

Urging voters to vote for PDP, the Delta State Governor said: “We have suffered as a nation in the last eight years. The only way out is to use our PVC to show the APC that we are unhappy with what they have been doing in the last eight years. There is insecurity in every part of the nation. That’s not the Nigeria of our dream. But there is hope which lies in your hands. Use your PVC to speak and save Nigeria. Let’s build a future for our youths together. It’s about experience. Atiku has the experience to take us out of the woods. Atiku with the rest of us can rebuild Nigeria. Take the campaign from market to market. PDP knows what to do. We have done it before, and we will do it again.”

Speaking, the Director General of the PDP presidential campaign council and Sokoto State Governor, Aminu Tambuwal, highlighted the political significance of Mapo Hall and Ibadan as the melting pot of politics in South West Nigeria.

He urged the people of the state to vote for all PDP candidates in the coming elections.

PDP National Chairman, Sen Iyorchia Ayu, also thanked Makinde for allowing the rally to hold, and for mobilising crowd for the campaign.

He said the leadership would not allow any individual to control the party again.

Ayu described Makinde as a “strong PDP member, a member of the family,” adding, “And you sometimes have disagreements in a family. I as the father of PDP in Nigeria, am calling all our aggrieved members to come back home because we shall win at every level … of course, we are going back to the villa. We shall be inaugurating the president this year. By the grace of God, in May, Atiku Abubakar and Ifeanyi Okowa will enter the villa. We are not just back, we are back to work for you, to improve your roads, education because the other party didn’t even care when our children were at home for one year….”

He said PDP was waxing stronger, declaring that the All Progressives Congress (APC) would cease to exist after the 2023 elections.

In his own goodwill message, Sen. Hosea Agboola, who is a strong ally of Makinde, assured the team that the people of Oyo State would vote for Atiku.

Earlier in his welcome address, the PDP chairman in Oyo Stat, Dayo Ogungbenro, extolled the virtues of Atiku and members of his campaign team, stressing that the party was lucky to have them as members and leaders.

“PDP is blessed to have these calibre of people. It shows that our party will go places,” he said.

He also thanked members and supporters for trooping out to attend the rally and the ongoing campaigns of Makinde.

Ogungbenro urged the people of Oyo State to vote for PDP from top to bottom.

“I’m sure that come February 25 and March 11, we shall all rejoice. I am assuring  all our leaders that Oyo State is PDP,” he said.

Tactically calling on the leadership of the party to mend fences with the G5, Ogungbenro said: “But It will be better for us to go into this election together as one.”

Though Atiku and all the party leaders spoke glowingly about him at the event for giving the rally a favourable space, it was clear that all was not well with the PDP at the national level and in Oyo State as Makinde was conspicuously absent at the rally.

Makinde is part of the G5 governors) demanding the resignation of Ayu as the party’s national chairman. Other members of the group are Nyesom Wike (Rivers), Samuel Ortom (Benue), Okezie Ikpeazu (Abia) and Ifeanyi Ugwunyi (Enugu).