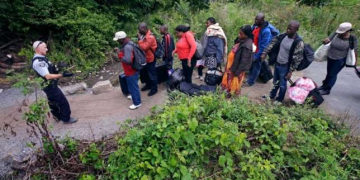 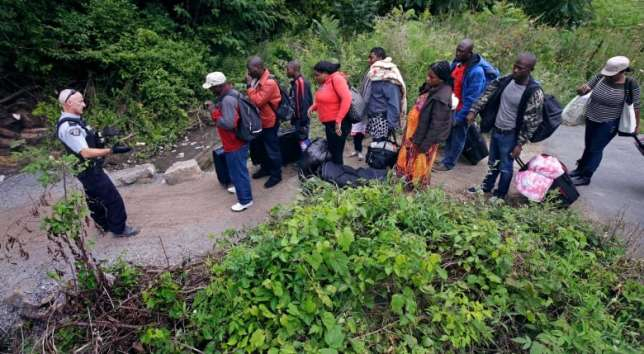 70.7% of Nigerians who illegally crossed borders into Canada to apply for asylum have been rejected by the North American country in 2018.

A recent Reuters report revealed that about 56% of refugee claims finalised between January and September 2018 were accepted, but the acceptance rates are lower for border-crossers, with Nigerians and Haitians forming the largest groups.

Nigerians make up a sizeable majority of thousands of people who have walked into Canada from the United States to file refugee claims since January 2017.

The acceptance rate of Nigerian border crossers stands at 29.3% as 9,898 Nigerians illegally walked into Canada, without going through a designated port of entry, between February 2017 and June 2018, according to data observed by Pulse from the Immigration and Refugee Board of Canada.
Canada adopts policy that affects Nigerian asylum seekersplay

Asylum seekers who are steps away from Canada listen as the Royal Canadian Mounted Police tells them they will be arrested as they cross over from New York state, north of Plattsburgh (CBC News)
Generally, CBC News reported in February that Nigeria surpassed China as the country with the most refugee claim decisions in Canada in 2017. Many of the claims relate to sexual orientation and gender persecution, most notably domestic violence claims from women as well as the practice of female genital mutilation.

Canada cracks down on border crossers with strict measures
The trend of illegal border crossers from Nigeria worried the Canadian government so much that two officials were sent to Lagos earlier this year to work directly with their counterparts in the U.S. visa office to collaborate on how to lower the number of migrants who eventually end up making asylum claims in Canada.

This was because many of the Nigerian border crossers were observed to have arrived in Canada bearing valid U.S. visas after having spent very little time in the States.

Between June 2017 and May 2018, Canadian authorities intercepted more than 7,600 Nigerian asylum seekers with 81% of them having valid U.S. non-immigrant visas in their possession.

Over the past few months, the Canadian government has implemented measures to protect its borders against the influx of asylum seekers, with many of it affecting Nigerians.

The Canadian Association of Refugee Lawyers (CARL) dragged the Canadian government to court over a recent court ruling that would make it harder for Nigerians to be granted asylum. The association was displeased with the IRB’s decision to establish as a legal precedent its ruling to deny a Nigerian woman’s asylum request.

The unnamed Nigerian woman was denied asylum even though she claimed she fled Nigeria to escape the practice of female genital mutilation. The court ruled that she could have sought refuge away from her rural family home in any of Nigeria’s large cities of Ibadan or Port Harcourt, and not necessarily run all the way to Canada.

The IRB seized on the ruling to designate it as a “jurisprudential guide” or legal precedent in considering all future Nigerian asylum cases.

CARL noted that the decision meant Nigerians would likely face a higher bar to gain asylum status than they did in the past with their acceptance rate (33% at the time) already below the average (47% as of June 2018) for all those who crossed the border illegally, according to data from the IRB.

More recently, the Canadian government adopted a new stringent policy to deal with asylum seekers who illegally cross into the country from the U.S.

The Canada Border Services Agency (CBSA), the agency responsible for deportations, disclosed to Reuters that it now classifies border-crossers with criminals as a top deportation priority.

This means quicker processing and deportation of people who cross the border unlike in the past when claimants could live in Canada for years while their applications were processed.

Six lawyers told Reuters that the new policy had already led to accelerated hearings, scheduled in blocs, with a focus on cases involving claimants of Nigerian and Haitian origins.

Teenager dies after inhaling deodorant to get high