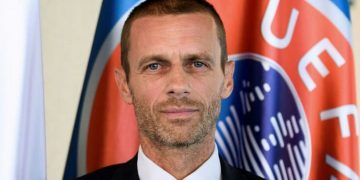 UEFA president, Aleksander Ceferin, was on Thursday reelected for a four year term as head of European football’s governing body by acclamation.

The 51 year old Slovenian lawyer was unanimously elected by the 55 national association members at a UEFA Congress in Rome.

Ceferin, who is the only presidential candidate in the election took over in September 2016, after the corruption scandal that ousted his predecessor, Michel Platini.

Ceferin thanked all the member associations for reelecting him, adding he is going into the new tenure with a great conviction.

“I am honoured, I have fewer doubts and less scepticism than before.

“The most dangerous thing we can do is rest on our laurels and bask in our current situation,” he said.

Ceferin added he wanted UEFA to put “hope and solidarity at the heart of our strategy”.